Building a market for cross-laminated timber

A $350,000 investment by Research and Innovation in the Bio-Economy (CRIBE) will help steer Northern Ontario toward the production of a new building product gaining popularity in Europe, said a representative of the architectural firm working on the
Aug 24, 2012 7:23 PM By: Arron Pickard 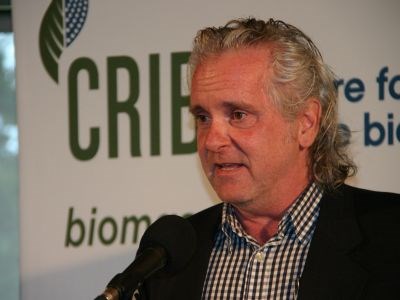 Laurentian Architecture’s Founding Director, Dr. Terrance Galvin, speaks during a press conference held Aug. 22 to announce a $350,000 investment by Research and Innovation in the Bio-Economy (CRIBE) that will go toward the use of cross-laminated timber in the design of the West Wing of the new School of Architecture. Photo by Arron Pickard.

A $350,000 investment by Research and Innovation in the Bio-Economy (CRIBE) will help steer Northern Ontario toward the production of a new building product gaining popularity in Europe, said a representative of the architectural firm working on the School of Architecture.

The provincial funds will allow Laurentian University to showcase the first significant use of cross-laminated timber in a public building in Ontario through the construction of the School of Architecture's West Wing. It will house a classroom, lecture hall and library, and much of the 12,000-square-foot structure would be exposed to view, with clear curtain glazing.

The funds will also be used to defray the costs for the consultant team to develop strategies to successfully detail and secure approvals for the two-storey section of the new Laurentian School of Architecture, set to open in the fall of 2015.

“As the first building of its kind in the past 40 years, it's important that we think of the School of Architecture not only as a place to house students, but as a place to inspire a generation,” said David Warne, a project architect from Toronto-based Levitt Goodman Architects. “The way to do that is to use innovate techniques and materials and expose them to view. It's almost like the school will be an assay on architecture the students can learn from.”

An engineered wood product, CLT is made by gluing and pressing together successive layers of spruce, pine or fir 2x4s or 2x6s to form large solid blocks or sheets that can be precision trimmed to specific purposes. CLT manufactured products can be used as walls, floors and roof panels in building construction. CLT construction is now being widely used in Europe, and is increasingly seen in taller wooden structures in the United States and in British Columbia.

“The possibilities created by CLT really are exciting from the architectural point of view,” said Laurentian Architecture’s Founding Director, Dr. Terrance Galvin. “This innovation in materials fits perfectly with our focus on green and sustainable building techniques, as well as our commitment to northern and Canadian design.”

In Europe, CLT is referred to as the new concrete, Warne said. It's strong and more fire resistant than traditional methods, and in Europe, seven-, nine-, and 11-story buildings are being from the material. In Ontario, architects are restricted to using wood on two-story institutional buildings and four-story residential buildings.

“In order for CLT to prosper, we need to change this, and we hope this demonstration project will be a catalyst that will get the political will and the industry behind a change in the laws around wood construction,” Warne said.

In Ontario, there's a huge lumber industry that makes a lot of 2x4s and 2x6s, which can be built into solid wood construction, he said, taking the place of concrete.

“Concrete is not a sustainable material,” he said. “To make it, you need kilns that burn at 600 degrees C, and it takes a lot of energy. In that process, you actually evaporate a lot of carbon into the atmosphere. Wood is the exact opposite — it takes carbon out of the atmosphere and turns it into building materials.

As the first building of its kind in the past 40 years, it's important that we think of the School of Architecture not only as a place to house students, but as a place to inspire a generation.

“It's a match made in heaven to take the 2x4s made here and turn them into bigger construction materials that can be used here and everywhere.”

The first step in that process, he said, is to show people what's possible with the use of CLT. Warne said he and his fellow architects aren't looking to change anything through this project; instead, they just want to show what it looks like, how it's put together and, eventually, once there is an entrepreneur who pushes to challenge the building code to do bigger building, “that's when it will start to gain momentum and that's when change will happen.”

He said he hopes it happens within three or four years. Right now, the problem is the building industry thinks of wood as a burnable material, because traditional wood materials like studs provide for ample room for flames to get around them. It's like a tinder box, so “of course it's going to burn.”

“When you lose the oxygen and make it a solid construction, then the flames are limited, and it doesn't burn.”

Europe isn't the only other destination that is catching on to the use of CLT. In British Columbia, they've used CLT in two projects at the University of British Columbia. In fact, there's a company in B.C. that builds CLT planks.

“In Ontario, we're rife (to produce CLT),” he said. “We want to do it here, but it's very technical and it's mostly around building codes.”

Until that happens, Warne and his fellow architects are content with encouraging the up-and-coming generation of architects to use wood in their designs.

They aren't the only ones, either. Sudbury MPP Rick Bartolucci, who made the funding announcement Aug. 24, said students at the School of Architecture will become so familiar with solid wood and CLT construction, that it will “create an army” of future architects who will be very comfortable in the use of wood with their designs.

“This will change the perception of the potential for wood,” Bartolucci said. “It will create a whole new market for Ontario's wood, and it's happening right here. This won't happen overnight, nor should it. It will be a transition, and as we move forward over the years, there will be many opportunities for the use of wood for mid-rise and larger buildings.”

“It's a triangular design with the CP Rail cutting through. and we've included a green public walkway that ties into a much larger network of greenways in Sudbury,” he said. “By adaptively reusing the two existing buildings on site, the Farmer's Market and the historic telegraph building, the plan is to build two more buildings to complement them. What I like in the plan is the interconnection of these four buildings, each doing its own thing, each a teaching tool.”

Phase 1 is to renovate the Market Square and the telegraph building, with construction slated to begin in January. After that, construction of the new buildings will begin approximately June of 2013.

The library, Warne said, will be built with a “beautiful wood ceiling, interesting columns, and we're going to hide all of the mechanical equipment in the floor so it can be just a really clean, gorgeous place.”

CRIBE is a non-profit agency set up by the Ontario government to advance the commercialization of the forest products industry in the province.