For the next three weeks, more than two-dozen Cambrian College Police Foundations students will be canvassing businesses and individuals, collecting donations of decked-out teddy bears.
Oct 23, 2012 3:26 PM By: Sudbury.com Staff 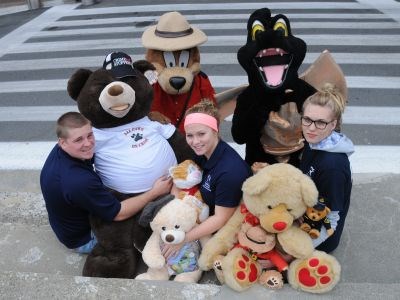 The bears will be auctioned off to raise funds for childhood cancer research.

“This year, we’re aiming to collect 150 teddy bears, and we’re encouraging businesses and individuals to be creative when customizing their bear for auction.

“Last year, we collected bears that were decorated to show off different businesses, professions, hobbies, and even sports teams. When donors add gift cards or coupons for products or services, it also increases a bear’s value at auction, so we’re hoping that people will be generous when they’re dressing up their bear.”

The Teddy Bear Picnic and Auction will take place Nov. 10, from 12 p.m. to 3 p.m. in Cambrian College’s Student Centre.

“Families who attend can expect to have a great time together, filled with activities, face painting, snacks, and tons of teddy bears to bid on,” said Cathy Burns, manager of the Canadian Cancer Society’s Sudbury Unit.

“All proceeds from the event support pediatric cancer research, so we’re hoping for a great turnout with some exciting live and silent auctions with competitive bidding.”

Since its inception six years ago, the Teddy Bear Picnic has raised more than $33,200 to support the most promising pediatric cancer research in Canada.

The Canadian Cancer Society is the largest charitable funder of childhood cancer research in the country.

For information on how to donate a bear or to find out more about the Teddy Bear Picnic and Auction, contact Patricia Clizia at the Canadian Cancer Society at 670-1234, ext. 3716.