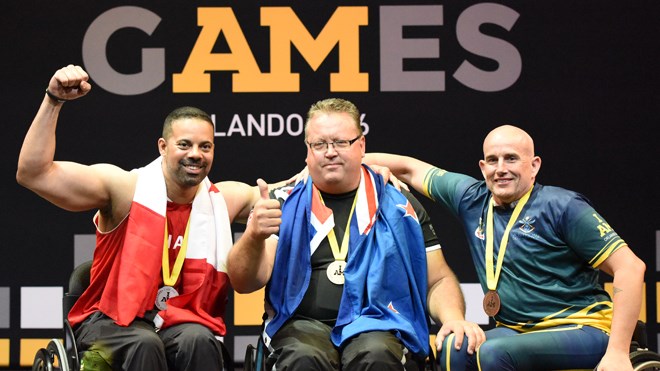 After a brief retirement from competitive rowing, to pursue a medical degree, Levack's Dr. Steven Daniel returned to the podium earlier this month with a silver medal at the 2016 Invictus Games in Orlando, Florida.

Long before he pursued a career in medicine, Daniel was a career infantryman and paratrooper in the Royal Canadian Regiment.

He joined the army in 1993, right after graduating from high school, and served in peacekeeping missions in Croatia and Bosnia, and later served in Afghanistan in 2003.

“It's just something I felt strongly about,” he said about his career with the military.

But in 2005 he was injured during a routine parachuting training exercise in Trenton, and fractured his T-11 vertebra.

The accident paralyzed him from the waist down, and ended his career with the military.

Daniel moved back to Greater Sudbury, and turned to sport to help with his recovery.

“I've always been passionate about health and fitness,” he said.

He was looking for an adaptive sport to take on, and decided to go with rowing.

His friend Thomas Merritt, a professor of chemistry and biochemestry at Laurentian University, had started an adaptive rowing program through the Sudbury Rowing Club.

Daniel excelled at the sport, and competed in the 2008 Beijing Paralympic Games.

Shortly after moving back to Sudbury, Daniel also returned to school.

He earned a business diploma at Cambrian College, and then pursued health promotion at Laurentian.

In 2011 Daniel was accepted into the Northern Ontario School of Medicine at the age of 37. He was the oldest student in his class.

He is now completing the first year of a family medicine residency in Sudbury.

In 2009 he had to put competitive rowing on hold to focus on this studies. But despite often working 13-hour days in his residency, he had to make an exception for the Invictus Games.

“It's hard to articulate how meaningful these games are to us,” he said, referring to his fellow veterans.

He arrived in Orlando on May 4, with his wife Danielle and 13-year-old son Owen.

Daniel said the Invictus Games were the first time his son had seen him compete, and added it was important for him to see other soldiers and veterans who have overcome adversity.

Many of his fellow competitors – from 14 countries – have been injured in Afghanistan and Iraq, and like Daniel, have turned to sport to aid their recovery.

By the end of the competition he got to join New Zealand's Kenneth Barnes and Australian Mark Urquart on the podium with a silver medal in the one-minute indoor rowing competition. Daniel rowed a distance of 247 metres in the competition.

Since returning to Canada Daniel said he has already heard from many other veterans about the 2017 Invictus Games in Toronto.

Daniel said that as a physician and athlete, he hopes to continue to advocate for people with disabilities and veterans.

Ontario extends emergency order to June 30
Jun 2, 2020 8:35 PM
Comments
We welcome your feedback and encourage you to share your thoughts. We ask that you be respectful of others and their points of view, refrain from personal attacks and stay on topic. To learn about our commenting policies and how we moderate, please read our Community Guidelines.