Queries include legalizing prostitution, how to end violence against women and other vulnerable groups
0
Oct 9, 2019 6:21 PM By: Darren MacDonald 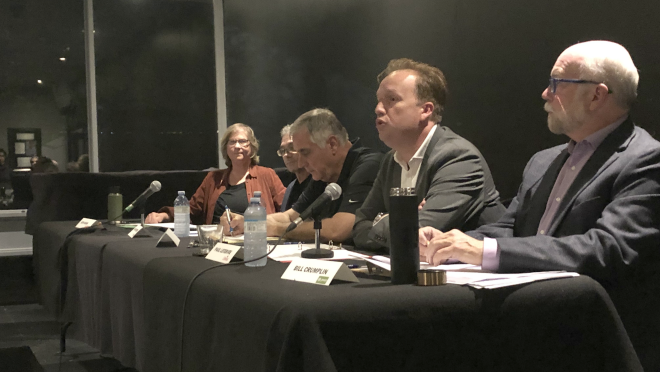 Four of the men – and one of the three women – running in the Sudbury riding were lobbed some tough questions Tuesday evening at the debate on women's issues.

Held in the Sudbury Theatre Centre lounge, members of the YWCA in Greater Sudbury moderated the event, dubbed 'Up for Debate.' It's a national series of debates presented by the Alliance for Women's Rights and Gender Equality.

Shaeyln Savignac, of YWCA Sudbury, warned the candidates that personal attacks wouldn't be tolerated, and said they'd prefer applause for ideas, rather than individual candidates.

The male candidates opened by mostly talking about the women in their lives – mothers, wives and daughters who have influenced them.

St. Amant said he grew up in a classic nuclear family, and welcomed the opportunity to speak “unfiltered,” he said, because the media often unfairly portrays his party as regressive.

“We are a party with progressive policies,” he said, adding he and his party fully support the rights of all people, regardless of their sexual orientation.

His party has come a long way, he said, and he supports gay marriage as something that can “be productive.

“But if you do have a love between a man and a woman it's still different to me,” he said.

Mairs said she had a “feminist awakening” in the 1980s, when she got pregnant and decided to give up the baby for adoption.

“It was an excruciating decision to make, and in the process of coming to a decision, I learned a great deal about motherhood -- both as an experience, and as an institution.”

While she was a hero to pro-lifers at the time, they nonetheless looked down on her for her choices.

“I learned this is the societal assumption, that I must be incompetent – not the empowered young woman,” she said. “I came to my feminism through the lens of my invisibility as a birth mother.”

In response to a question about what they would do to end all violence against women and other vulnerable groups, Lefebvre said where people live often determines the level of access victims have to resources that can help them.

The Liberals have worked to increase access and to remove barriers, he said, but much needs to be done.

“We need to move on and build on a national action plan,” he said.

Crumplin said his party has several policies aimed at helping women and those facing violence.

“It is really difficult to say that I know, or any party knows, how we can eliminate violence against women,” he said. “One of the things that we are going to do is expand the funding to shelters -- both for first stage emergency, and also for longer-term residential. That's something that's very important to us.”

Mairs agreed it was a big, difficult question, but said getting at the underlying causes is key.

“Unless we’re addressing the larger issues, like poverty” there are always going to be too many women stuck in violent situations, she said.

What many people don't know, she said, is the leading cause of homelessness among women is domestic violence.

“It’s not addiction,” she said. “So if you look at violence, it is so gendered, it is so racialized.”

St. Amant said the Conservatives are focused on “meaningful results on the ground,” such as clean water for First Nations communities, improved housing and economic development.

“So people are working and have confidence in the future,” he said.

Responding to a question about whether they support a national child care policy, Paterson said the PPC platform doesn't include one.

“But we will not be cutting services,” he said, and lower taxes will benefit families and make it easier for one parent to stay at home to care for the kids.

“It will make a big difference to the development of children,” he said.

St. Amant said he was long skeptical of a national child care program, but the success of the one in Quebec has changed his mind.

“It was very expensive system, but it has produced great results,” he said. “I have to admit it had a very positive effect. More women were able to join the workforce. I was skeptical but certainly was proven wrong.”

Lefebvre agreed the Quebec model was great, and Crumplin said the Green plan is based exactly on Quebec.

Candidates were also given a tough question about prostitution: would their party support legalizing the sex trade to ensure sex works are not attacked and receive the support they need.

“Even for the Johns?” St. Amant asked. “Interesting question.”

He said the Tories have no specific policy to legalize prostitution, but agreed jailing sex workers is not the answer.

“Criminalizing prostitution is not solving the problem,” he said. “But I don’t think anyone chooses prostitution as a career if they have a choice.”

Lefebvre said his party wants to end the stigma attached to sex workers and ensure they have access to care and other services. Because gender violence is rife among sex workers, something has to be done.

“The only way to eliminate that is to legalize” the sex trade, he said, and it’s a conversation his government would be willing to have.

Crumplin said the Greens would legalize the sex trade, while at the same time offer programs for those who want to leave on the other.

“It’s not necessarily a negative choice,” to be a sex worker, Mairs said, so reducing stigma is really important. And jailing prostitutes does no one any good.

“What we see with criminalization is a damaging view of a women’s self worth,” she said. “I am personally very supportive of this going forward.”