A Greater Sudbury company has landed a contract with the Canadian Space Agency to build a combination drill and rotary multi-purpose tool that is essentially a space-age 'Swiss Army Knife.
0
Apr 6, 2016 9:02 PM By: Jonathan Migneault 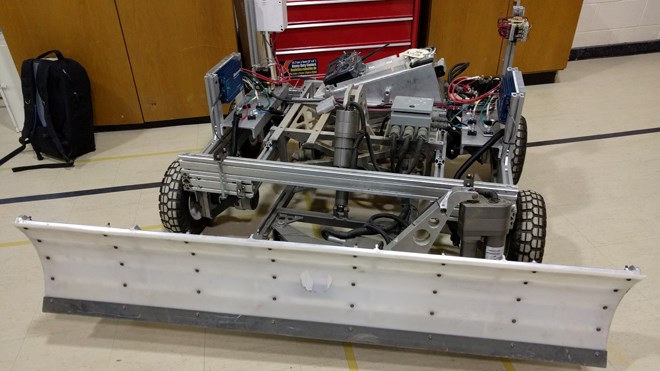 Capreol's Deltion Innovations is a mining and automation robotics company that has developed drilling and excavation technology, like the grading robot above, for more than 15 years. Photo by Jonathan Migneault.

A Greater Sudbury company has landed a contract with the Canadian Space Agency to build a combination drill and rotary multi-purpose tool that is essentially a space-age 'Swiss Army Knife.'

The federal department of Innovation, Science and Economic Development has granted the Canadian Space Agency $700,000 to fund projects like Deltion Innovations' Percussive and Rotary Multi-Purpose Tool, or PROMPT.

The tool will be able to drill into the moon or Mars at small depths – around 10 centimetres, to collect samples, and will also be able to complete the attachment and removal of screws and bolts in robotic construction, maintenance and repair tasks.

A lightweight robotic tool like PROMPT means organizations like NASA can maximize space by building structures at surface, and transporting everything in pieces.

In addition to its light weight and multiple uses, the tool will need to withstand extreme conditions.

“Where they're looking to set up mining on the moon the ground temperature is -150 C,” said Deltion Innovations CEO Dale Boucher. “Once you get into the sunlight, because there's no atmosphere, the temperature on the surface goes to 150 C.”

The device would also be subject to corrosive dust, cosmic radiation and would have to work in a low-gravity environment.

Boucher said the Canadian Space Agency has approved the concept for the tool. The next step is for Deltion to present a more detailed design, and then produce that design.

If all goes according to plan, Deltion could be testing its PROMPT prototype by Christmas.

Deltion is subcontracting with two other Ontario based companies – Neptec Design Group, based in Kanata, ON and Atlas Copco, in North Bay, to work on the PROMPT project.

He said the federal government will continue to support small companies like Deltion to promote innovation.

Expect to pay around 98.9 at the pumps in Sudbury today
Jun 4, 2020 7:24 AM
Comments
We welcome your feedback and encourage you to share your thoughts. We ask that you be respectful of others and their points of view, refrain from personal attacks and stay on topic. To learn about our commenting policies and how we moderate, please read our Community Guidelines.