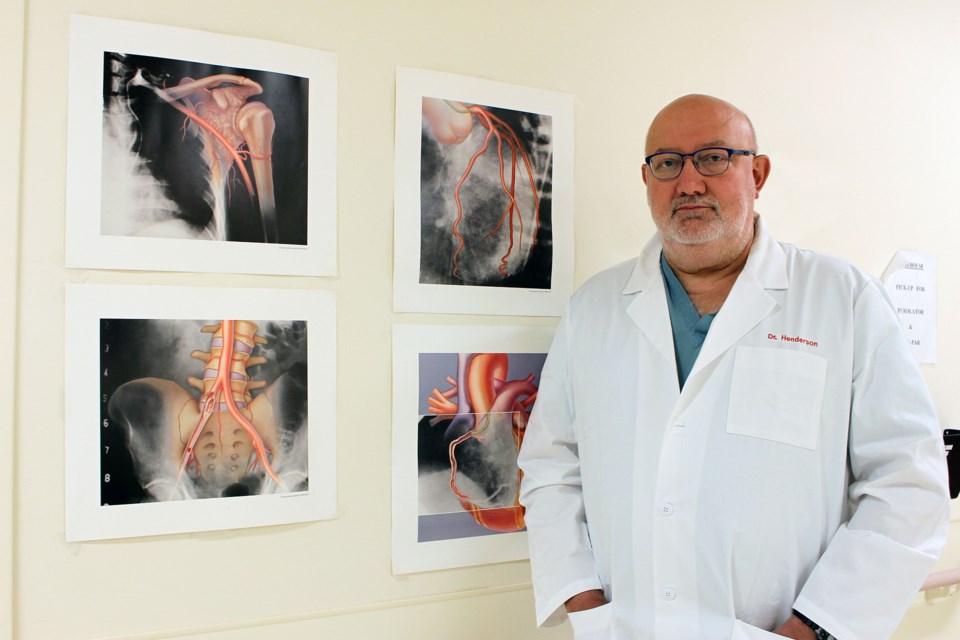 Dr. Mark Henderson, an interventional cardiologist, took up his duties as medical director of cardiology at HSN in April after almost a decade at Thunder Bay Regional Health Sciences Centre. (Allana McDougall/Sudbury.com)

The cardiology department at Health Sciences North is stepping up its game to prepare for a tsunami of Baby Boomers suffering from heart disease that could swamp the hospital if its cardiac program is not expanded.

Dr. Mark Henderson, an interventional cardiologist, took up his duties as medical director of cardiology at HSN in April after almost a decade at Thunder Bay Regional Health Sciences Centre.

Henderson established the first remote standalone angioplasty program in the province at the hospital in northwestern Ontario. He is credited with establishing a second cardiac catheter lab in Thunder Bay, as well as the angioplasty service that has saved or enhanced the lives of countless patients.

Cardiac surgery is not performed at the Thunder Bay hospital, although there is a plan to introduce it in the coming years.

But Sudbury is closing in on 50 years of heart surgery. The first cardiac operation was performed here in 1969 at the former Sudbury Memorial Hospital.

In a way, the hospital system is a victim of its own success. Henderson said he saw a patient just this week, who had bypass surgery 27 years ago. The patient requires a pacemaker now, but he wouldn’t be alive to have that procedure if he had suffered heart disease in the pre-bypass era.

Baby Boomers are not just large in numbers. They are living longer as life expectancy climbs. Henderson’s first goal in his new position is to improve cardiac surgery at the tertiary care hospital that serves a population of 650,000 in the Northeast. Because people in the region have higher rates of cardiac disease, the services required to treat our population is equal to those needed to treat a million in southern Ontario, he said.

“We need to be ready to look after that population and it’s a big population,” Henderson said in an interview this week in his office on the third floor of the centre tower at HSN’s Ramsey Lake Health Centre.

In Thunder Bay, the rate of heart disease is even higher – essentially double the average 1,000 heart attacks for 100,000 people, said Henderson.

Sudbury has a higher rate of heart disease, but it’s not as high as our northwestern neighbour. Those rates apply to strokes, heart attacks and heart failure.

High rates of smoking, lower socioeconomic conditions, more obesity and diabetes and not enough exercise all contribute to high rates of heart disease in Northern Ontario.

As well as expanding clinical services, Henderson said cardiologists have teaching and research commitments, and he is also focused on those duties. The specialists teach in internal medicine classes at the Northern Ontario School of Medicine because internists who work in small communities do what he called “bread and butter cardiology,” so they must learn the basics.

There is also a commitment to contribute to the work being done at the Health Sciences North Research Institute. A cardiologist hired recently, for instance, has protected time to conduct research two days a week and sees patients three days a week. Research in heart disease among indigenous people, who suffer poorer than average health in the Northeast, is another area his department is focused on.

When Henderson was in training decades ago, cardiologists were not doing angioplasty, also called percutaneous coronary intervention or PCI. It is a procedure to open clogged heart arteries by temporarily inserting and inflating a tiny balloon where the artery is clogged to widen it.

Bypass surgery was being performed at that time, but methods have vastly improved and a range of medications have revolutionized the practice of cardiac medicine, said Henderson.

One branch of cardiology not done extensively at HSN is electrophysiology.

People with irregular, fast heartbeats can be treated with the insertion of catheters through veins in the leg and neck into the heart that regulate one’s heartbeat.

HSN has been looking to expand that treatment and submitted a plan to the Ministry of Health. It may have to be resubmitted because of the change in government, said Henderson.

For now, patients must leave Sudbury to have those procedures.

“It’s a very important part of business we don’t yet do,” he said. “But we very much want to get into it. For me, that is one of the high priorities to expand (the cardiac) program.”

Since 2013-2014, about 5,000 procedures have been done annually in the cardiac cath labs at HSN’s Ramsey Lake Health Centre.

HSN has 13 credentialled cardiologists and another will take up duties in January 2019.

The hospital is looking to fill three other full-time equivalent vacancies.

Since 2014, HSN has been performing transcatheter aortic valve implantation (TAVI) for patients with substantial narrowing of the aortic valve. At the time, it was one of only 10 hospitals in Ontario offering the procedure. TAVI is designed for patients for whom open chest surgery to replace aortic valves is too risky to be done.

New Thorneloe show has both straight and pansexual versions
0