Change is needed to stave off climate change crisis: Suzuki

For those who think it's impossible to reduce energy use, broadcaster, environmentalist and scientist David Suzuki said the 2011 Japan earthquake, tsunami and subsequent nuclear disaster proves it isn't.
0
Oct 17, 2013 9:18 PM By: Heidi Ulrichsen 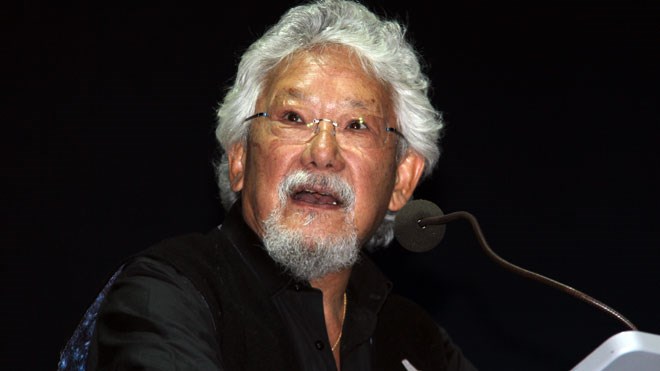 For those who think it's impossible to reduce energy use, broadcaster, environmentalist and scientist David Suzuki said the 2011 Japan earthquake, tsunami and subsequent nuclear disaster proves it isn't.

“Every one of the 52 nuclear reactors was shut down, and Japan reduced its energy use by over 25 per cent,” he said during his keynote speech at a local energy conservation symposium.

“There were no regulations, no laws passed. It was strictly voluntary. Today in Japan only two of the reactors are back up and running.

“Yet if you go to Japan today you'd think everything seems fine. What the hell did they need the nuclear reactors for?”

This is in a country that uses power for frivolous reasons such as toilet seat warmers, Suzuki said.

“I keep telling the Japanese, are Japanese bottoms so tender you have to have it warm to take a dump?” he said. “If you shut down every electric toilet seat in Japan, you would shut down two nuclear plants.”

Suzuki made the comments at the saveONenergy Symposium. Organized by Ontario Power Generation and six northern utilities, the symposium provided businesses with suggestions about how to save on electricity usage and lower hydro bills.

He said he's not an expert on energy conservation, so he wasn't going to provide specific tips, but rather wanted to provide some context for the work those in the audience are doing.

“I want to congratulate the Ontario Power Authority for embracing energy conservation,” he said.

“That is so great. I've got to add a little aside and say 'God, it took you awhile to get there,' but I'm glad you did.”

During the OPEC oil embargo of 1973, people began to seriously look at renewable energy resources, but no more so than in Denmark.

“But our top engineers in Canada said 'Impossible. Wind can never, ever provide more than two per cent of our energy needs,'” he said. “Denmark is over 18 per cent already, and is aiming for a much higher amount.”

But Suzuki points out that before the Russians launched the first satellite in the mid-1950s, space exploration seemed impossible, but by 1969, the United States had put the first person on the moon.

“That is a challenge that confronts us with climate change,” he said. “We know what the problem is, we know what the real solution is. That is our opportunity.
“There are enormous opportunities, but we just have to make a commitment that we're going to get off fossil fuels, and we've got to invest everything in renewables.”

Canada actually has a wealth of sources of environmentally friendly energy production, including solar, wind, geothermal, tidal wage, run of river and countless other methods, he said.

People seem to need a “crisis” to spur any sort of change when it comes to energy production, Suzuki said.

“Well folks, we have that crisis,” he said, pointing to the recent Intergovernmental Panel on Climate Change Report which said the burning of fossil fuels is warming the planet.

“The solution is also very clear and very simple,” Suzuki said. “If we want to avoid climate catastrophe, we have to get off fossil fuels.”

Nuclear power is also problematic, he said, as the nuclear industry has failed to come up with a permanent solution to store spent nuclear fuel.

For those who think humanity can't abandon conventional power sources for fear of damaging the economy, Suzuki said the economy is a human construct, and shouldn't hold us back from protecting what's most important – the planet.

Suzuki gave a damning review of Prime Minister Stephen Harper's response to the issue, including his attempts to muzzle scientists raising the alarm on climate change, as well as his investments in carbon capture technology.

“That's what he wants to use, then, as the excuse for exploiting the tar sands,” he said. “But nature has already captured that carbon. It took billions of years. It's crazy to think that we're going to dig up the tar sands, burn it, and then say we've got to capture that and put it back in.”

Suzuki is slightly more charitable with his words when it comes to Premier Dalton McGuinty. He said he applauded him when he ran on the promise of shutting down coal-powered generating plants.

“But then after he was premier, he announced he had plans to expand the Darlington facility. I was pissed off.”

He then asked McGuinty to do something about energy conservation, and offered to be the face of the campaign. To his credit, the premier agreed, he said.

Paula Tarini, supervisor of conservation at Greater Sudbury Hydro, said she thinks those at the conference learned a lot from Suzuki's talk.

“He certainly did educate us to where we should be going and what we should be looking at, and energy is a huge component of it,” she said.

Amy Snook, business manager in the conservation division of the Ontario Power Authority, said the first resource considered for meeting the province's electricity needs is conservation.

“Conservation is less costly than building new generation,” she said. “It is an effective tool for businesses to better manage their bills and stay competitive, and there's nothing cleaner than conservation.”

Nickel District Pool closed for the day
Jan 19, 2020 12:46 PM
Comments
We welcome your feedback and encourage you to share your thoughts on this story. We ask that you be respectful of others and their points of view, refrain from personal attacks and stay on topic. To learn about our commenting policies and how we moderate, please read our Community Guidelines.