Age caps for funding and lack of clinicians to provide diagnoses stand out as issues
Feb 15, 2021 5:00 PM By: Matt Durnan 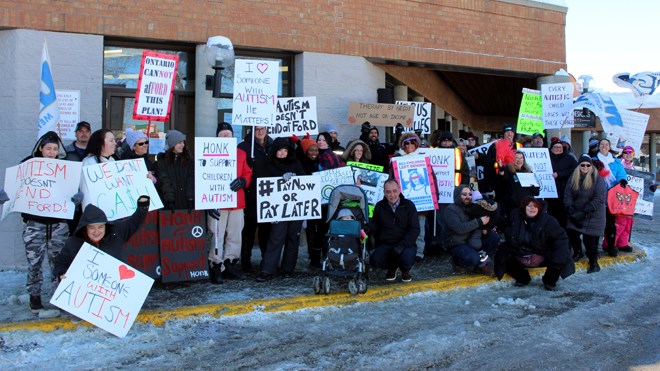 In a 2019 photo, Sudbury parents of children with autism and their supporters gather in front of MPP Jamie West's office to protest changes the province is proposing to how autism services are funded. (Matt Durnan / Sudbury.com)

The Ontario government announced additional supports for families of children with autism Feb. 3, but a pair of Sudbury parents feel the program still falls short.

Starting in March, about 600 children and youth from across the province who are registered with the Ontario Autism Program will be invited to participate in the launch of core clinical services.

The province will begin offering core clinical services based on a child's individual needs, a key element of the new Ontario Autism Program. The government has said these services include applied behaviour analysis, speech language pathology, occupational therapy and mental health supports.

While the province has touted the rollout of the new program as a step towards needs-based service, funding allocations for children requiring autism services are still based on age.

While it’s a small step in the right direction for the province to begin developing programming based on individual needs of children with autism, there is still a lot of work to be done.

“This is actually the start of a trial program for 600 kids of a waitlist of 44,000,” said Sara Kitlar-Pothier, chair of the Northern Capacity Building Advisory Committee.

“(These kids) will be chosen to test their standardized tool, so again this just means further delays to the program that we’ve already been waiting two years for.”

Another sticking point for Kitlar-Pothier is that the province will be bringing in care co-ordinators rather than clinicians to run the pilot program for the 600 children.

“What’s most concerning is these care co-ordinators are not clinicians, so they’ll be applying these tools that are not based on clinical needs,” said Kitlar-Pothier.

“Ideally, if I bring my son to a clinician to determine how many hours he needs, that would be needs-based.”

The concern among Sudbury parents of children with autism, Kitlar-Pothier said, stems from the fact they feel the program being rolled out isn’t looking closely at the needs of Northern Ontario children.

Julia Ritchie, a leadership member with the Northern Ontario Autism Alliance, said a funding structure that is still based on age is harmful for Northern Ontario kids, as their wait times for diagnoses are longer than children in southern Ontario.

“Kids in Northern Ontario have the longest wait times for diagnoses and typically our wait times to enter into therapy have been longest,” said Ritchie.

“To see age caps on how much your child qualifies, it stings as a northerner because you know there are so many children that waited a long time for a diagnosis. All of this is time where families are waiting and wondering if their child will ever get help.”

Additionally, with the lengthy wait times to receive a diagnosis and enter into therapy programs, children could pass right through one age cap and into another, costing families valuable funding.

In other words, a child with autism could be waiting for a diagnosis at age nine, but if they aren’t diagnosed until they reach age 10, their funding cap decreases by more than $20,000 annually.

“It’s very arbitrary. There’s no research that shows therapy works at age nine, but not at age 10, so they just kind of drew a line in the sand -- there’s definitely a problem with the arbitrary age caps,” said Ritchie.

Kitlar-Pothier said that the average age for a Northern Ontario child with autism to receive a diagnosis is seven years old.

“With those funding minimums and maximums, it’s still discriminatory based on age,” said Kitlar-Pothier. “The provincial average for diagnosis is four-and-a-half years old, (but) in the north it’s seven years old. We’re looking at the idea that you’d be missing out on a good portion of the maximum that would be available for your child.”

Costs associated with autism therapies such as Applied Behavioural Analysis (ABA) can be upwards of $100/hour, and with a provincial funding structure that is still based on age, picking the appropriate level of services can be a tall task for families.

“Determining what my child needs based on their clinical needs is what a needs-based program should look like,” said Kitlar-Pothier. “Understanding that some children need more (and) some children need less, but what they’re presenting is troublesome to the children who need more support and that age cap limit has to go because autism doesn’t have an age limit.”

Ritchie said the previous Ontario Liberal government was on the right track with its Autism Program, but a shift towards privatization of services under the Ford government has created a massive waitlist and driven up costs for services.

“Under the old OAP there were caps put on prices for services, and a lot of people left work at places like CCR (Child and Community Resources) because they were defunded, so they went to start their own businesses,” said Ritchie.

“Obviously with a startup, you’re going to charge more and I’m not saying the providers are greedy, but when you move to a completely private model and providers are so scarce, it doesn’t really lead to market regulation.”

Another sticking point for parents in the North is that the province has made no mention of funding for travel for parents who can’t access autism services in smaller, rural communities.

“We need support for travel and that wasn’t included at all,” said Kitlar-Pothier.

A child could qualify for $65,000 annually, for example, but travel costs could run up to $2,000 a year for families that have to drive an hour each direction to get services for their child.

With therapies like ABA costing $100 an hour, that child could be missing out on 20 hours of therapy due to travel costs.