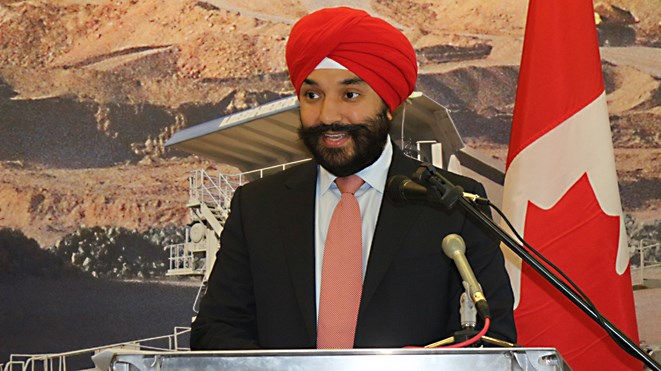 Navdeep Bains, the minister of Innovation, Science and Economic Development, and Minister responsible for FedNor, makes an announcement Wednesday at B&D Manufacturing in Chelmsford. The federal and provincial governments are providing almost $2 million to help companies in Northern Ontario export their products. Darren MacDonald photo

The Liberal government is committed to changing the culture of government, Navdeep Bains, Minister of Innovation, Science and Economic Development, and Minister responsible for FedNor, told reporters during a recent visit to Sudbury.

Bains was asked about an in-house survey obtained by NDP MP Charlie Angus, which found the morale of staff at FedNor had plummeted under the former Conservative government. In an open letter, Angus said only 30 per cent of staff said it was a good place to work in 2014, compared to 80 per cent in 2008.

"I actually surprised a few of them in their offices while they were working," Bains said. "So it was really a neat opportunity to engage with them, to listen to them. We got a lot of positive feedback.

While there have been calls to make FedNor a full agency, he said economic development is the government's priority right now.

Bains was in Sudbury to announce that the federal and provincial governments are providing $1,904,200 in funding in an attempt to increase the number of exporting firms in Northern Ontario.

Bains made the announcement with Lefebvre, Serré, Sudbury MPP Glenn Thibeault and Mayor Brian Bigger at a news conference at B&D Manufacturing in Chelmsford.

The federal government is providing half the money through FedNor, while the province is providing the other half through the NOHFC. The money will go to support the Northern Ontario Exports Program, which provides resources for training, marketing and advertising initiatives.

The money will also allow Ontario's North Economic Development Corp. to set up at the Canadian Pavilion at Minexpo International, the largest mining conference in the world, which takes place in Las Vegas from Sept. 26-28.

"My colleagues Paul and Marc have been working very closely with FedNor to really develop a plan on economic development and growth in this area," Bains said.

"I met with mayors in Northern Ontario. I had a great discussion about Sudbury, but also the northern part of Ontario and how we can really focus on areas of mutual interest ... FedNor is going to be an essential too for that."

"Our government continues to create jobs and grow the economy across Northern Ontario with strategic investments through the NOHFC,” Thibeault said in the news release announcing the money. “The latest funding that is being provided for ONEDC will help Northern businesses capitalize on their potential, plus reach new and emerging markets around the world.

“Our ultimate goal is to help businesses thrive in today's ever-changing marketplace while providing good job opportunities in communities across the region."

In his meeting with northern mayors, Bains said their focus was on infrastructure projects and getting federal support. The Liberals have promised to spend $120 billion over the next 10 years on infrastructure.

The Liberals have already provided almost $27 million for the Maley Drive extension, but Sudbury has several other projects in the works, including a new arena development, art gallery, library and several roads projects. Bigger did raise those projects in their meeting, Bains said.

"He did mention them, so he did his part,” he said. “And so did the other mayors, they were very eloquent and very thoughtful."

The federal government will be prioritizing projects that are ready to proceed and that have the greatest economic impact, he said.

"We have to focus on infrastructure projects that really help link corridors, help link communities, help allow our mining sector to continue to thrive, look at other sectors where we can diversify," Bains said.

"We're going to work in collaboration ... with our provincial government, our municipal government to establish priority areas and move that agenda forward."

Bridge over Wanup Pit Road dedicated to fallen Sudbury police officer
Sep 24, 2020 7:00 PM
Comments
We welcome your feedback and encourage you to share your thoughts. We ask that you be respectful of others and their points of view, refrain from personal attacks and stay on topic. To learn about our commenting policies and how we moderate, please read our Community Guidelines.