NDP leadership candidate talks Trudeau, the working poor and how the party 'blew' the 2015 election
May 1, 2017 9:05 AM By: Darren MacDonald 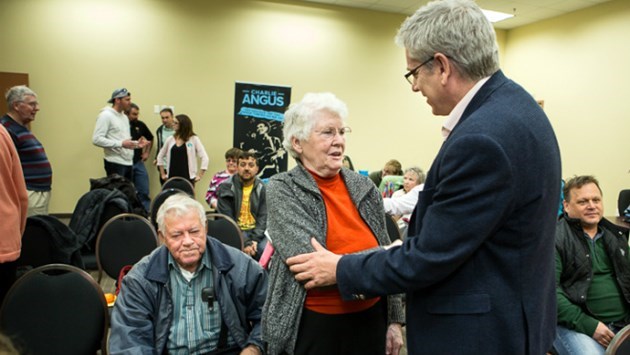 Timmins-James Bay MP Charlie Angus was in Sudbury on the weekend, as he tours the country in support of his candidacy to lead the New Democratic Party in the next federal vote. (Supplied)

Charlie Angus readily admits that Justin Trudeau's Liberals somehow “out-lefted” the NDP in the 2015 election, one which most observers thought would be a two-way race between the New Democrats and Conservatives.

"Frankly, we blew it,” Angus said, sitting in the Laughing Buddha on Saturday afternoon. “We made serious mistakes on the campaign at the national level.

"Coming in to the 2015 election, he was in third place and he saw an opportunity, he was going to out-left us. Our huge mistake was we didn't take it seriously at the time. We didn't think it had credibility."

Then he adds, "no use crying over spilt milk."

The party quickly dumped leader Thomas Mulcair and Angus is one of five running to replace him, along with Niki Ashton, Guy Caron, Peter Julian and Pat Stogran. The vote will be held in October.

Trudeau, Angus said, has turned out to be a fake progressive, obsessed with projecting an image that is the opposite of U.S. President Donald Trump.

"There's a disconnect between his selfie/Oprah style politics and what ordinary Canadians are living,” Angus said. “The Liberals are doing very much reality-style TV politics that's just a different version of Trump. Trump is giving us angry Jerry Springer politics, Justin Trudeau is giving us Oprah politics.

"But it's all image, it's all about feel-good. There's this image of him in the United States as a faux feminist, meanwhile people are dealing with the fact they have no pensions, they're burdened with student debt, more and more people are on short-term work contracts."

It's that last point he says he is most passionate about, to be the voice of the growing army of Canada's working poor. No longer is there the same divide, he said, between white- and blue-collar workers.

"I've seen what's happened to the middle class,” he said. “It's disappeared and now it's the new working class — white collar and blue collar stuck in endless contract cycles without any chance of a pension.”

He said he talked Saturday with a woman who, 15 years ago, thought she had gotten a great job in the technology sector. She went to school, got training and her first job. But the work was piecemeal and without benefits.

"Whatever savings she had was lost when she lost her front tooth,” Angus said. “She's a white-collar worker without a front tooth. Nobody is going to hire her. We're saying to these people, you're being written off the economic map of this nation. You need someone who is going to fight for you."

It's become a Liberal norm to campaign like left-wingers, then govern like conservatives, he said, pointing to Trudeau's support for pipelines and Kathleen Wynne's decision to partially privatize Hydro One.

"(Former Tory Premier) Mike Harris never would have had the guts to privatize hydro, but Kathleen Wynne and Glenn Thibeault did," he said. “So what you've seen with Liberal governments is they actually, ideologically, follow the economic plan of the Conservatives — to a much more effective degree."

He cites the Liberal tax break to the middle class, which Angus said doesn't benefit anyone making less than $23 an hour. So instead of helping those who need it, families already making a good living get more.

"We need to start putting those issues on the agenda. Justin Trudeau is living in a fiction world. He says he's the great defender of the middle class. Him and I come from very different places. Maybe the middle class where he comes from is extremely different than the middle class my family grew up in, the children of miners."

The halo will be off the Liberal leader come 2019, Angus said, offering New Democrats a chance to gain back disenchanted voters.

"We're going to be dealing with a prime minister who has abandoned so many of those promises that he made,” he said. “Electoral reform — it was so cynical the way he handled it. His promise on the environment, he's talked the talk, but he's not walking the walk. I think we have an opportunity to present an authentic voice – an enormous opportunity."

Ontario fares no better than 20th as a mining-friendly jurisdiction, according to Fraser Institute
Mar 3, 2021 9:17 AM
Comments