Chi-Cheemaun death: TSB and MOL not investigating after passenger falls off ferry

Investigation being carried out by Manitoulin OPP, which says woman's death not being considered suspicious
Jun 24, 2019 5:00 PM By: Sudbury.com Staff 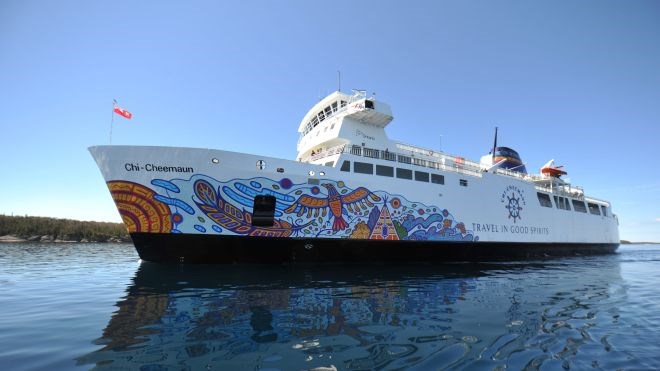 The Transportation Safety Board of Canada (TSB) and the Ontario Ministry of Labour are not are investigating after a passenger died when she fell overboard the Chi-Cheemaun ferry on Lake Huron Friday.

The TSB is an independent agency that advances transportation safety by investigating occurrences in the air, marine, pipeline and rail modes of transportation, said its website.

Janet Deline, a spokesperson for the Ontario Ministry of Labour — which, among other functions, investigates deaths and injuries in Ontario workplaces — said the ministry was not notified of the Chi-Cheemaun death, and is not investigating.

The Manitoulin OPP said it is investigating the woman's death. According to a press release put out by police Saturday, the fatality is not being considered suspicious.

The Chi-Cheemaun was travelling on Lake Huron between South Baymouth on Manitoulin Island and Tobermory late Friday night when the woman fell off the ferry.

The Manitoulin OPP Marine Unit and the Canadian Coast Guard were able to locate the woman's body. Her identity has yet to be released.

The Owen Sound Transportation Company, which runs the Chi-Cheemaun ferry, issued a statement after the woman's death.

“We extend our deepest sympathy to the family and friends of this passenger in this time of tragic loss,” said Susan Schrempf, president and CEO of the Owen Sound Transportation Company, in a written statement.

“Out of respect to those who have lost their dear friend and family member, we will not be making any further public statements.”