Climate action a top issue this election, and the youth and the world are watching, group says
Oct 18, 2019 12:00 PM By: Sudbury.com Staff 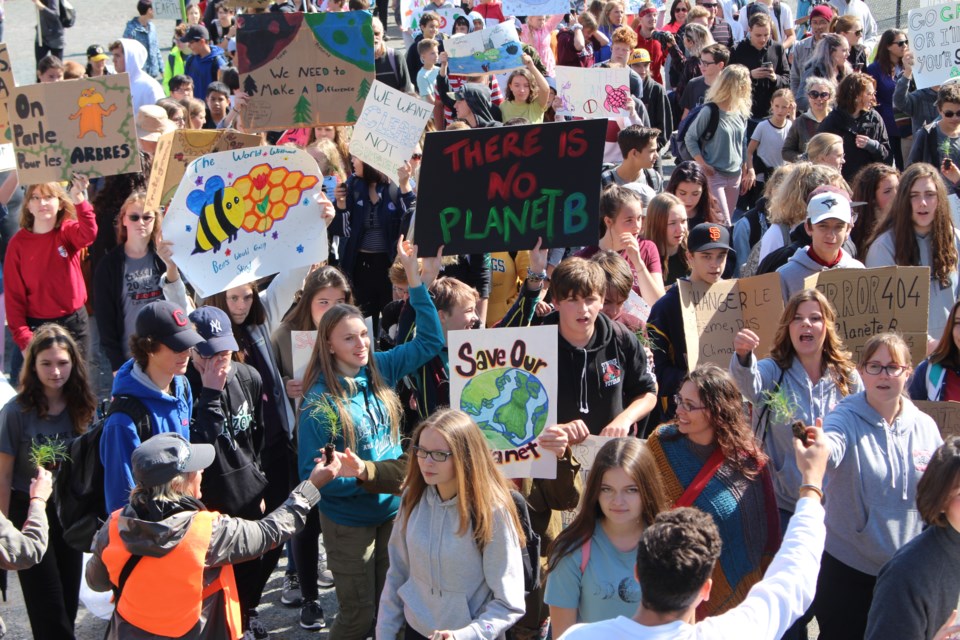 A scene from the Fridays for Future climate rally in Bell Park last month. (File)

As Canadians get ready to head to the polls Monday, here's what the group Citizens' Climate Lobby thinks you should know about the federal parties’ plans to reduce Canada’s greenhouse gas emissions.

For the first time during a Canadian election, the climate is a top issue, said Citizens' Climate Lobby.

From Sept. 20-27, more than one million Canadian youths and adults were on the streets following in the footsteps of the Swedish youth climate activist Greta Thunberg and raising their concerns about the climate crisis, said Sudburian Cathy Orlando, international outreach manager for Citizens' Climate Lobby.

“There are no doubts that youth are watching what the adults will do in this election because Greta Thunberg clearly said, 'You say you love your children above all else, and yet you are stealing their future in front of their eyes,'” Orlando said.

How many adults know that 27 Nobel Prize economists and thousands of economists worldwide support similar carbon pricing policies to what we now have currently in Canada, asks Orlando.

Or that 80 per cent of households under the federal backstop carbon pricing policy come out ahead and that this has been confirmed by the Parliamentary Budget Office?

Or that if Canada’s carbon price rises past 2022, we get much closer to achieving the Paris climate goals and that this has also been confirmed by both the Parliamentary Budget Office and independent analysis.

“For the past nine years, our volunteers have presented to their Members of Parliament countless facts about how carbon fee and dividend can bring greenhouse gas emissions under control without burdening taxpayers,” Orlando said.

“As the International Outreach Manager for Citizens’ Climate Lobby, I know firsthand that youth are not the only ones watching this election – the world is watching Canada's election, too. In June 2019, our volunteers set an intention to objectively display to the best of abilities the key climate policies for the major national parties in Canada.”

Following is the Citizens' Climate Lobby's take on the major parties climate platforms:

The Conservative Party released its climate platform in June 2019. Their plan is to maintain Canada’s woefully inadequate Paris Climate Targets (30 per cent reduction below 2005), the press release said. Their platform lacks details and multiple expert analyses indicate the Conservative climate plan is unlikely to achieve much in the way of emissions reductions.

Central in their plan is to dismantle Canada’s carbon pricing policy and clean fuel regulations. The Conservative plan would also cost the average family $295 by 2022. Additionally, the Conservative Party of Canada was the only party to vote against Canada declaring a climate emergency in June 2019.

On Sept. 20, Conservative leader Andrew Scheer vaguely stated that fossil-fuel subsidies could be cut in a plan to slash corporate handouts, said the press release. All other parties are clear about eliminating fossil fuel subsidies.

The NDP and Green party have made promises to be very aggressive at reducing GHG emissions, more in line with science, the Green Party even more so than the NDP. Both parties openly endorse the use of carbon pricing, and the Green Party would like to see the carbon price rise well beyond $50 per tonne after 2022.

Both parties have sensible plans to help workers transition away from fossil-fuel sectors toward greener ones. They both have plans on how to restructure Canada’s tax system to help pay for the transition to a low carbon economy.

For voters in Quebec, it should be noted the Bloc Québécois’ targets are Canada’s woefully inadequate Paris Climate Targets, they supported Canada’s climate emergency declaration, and they plan to end subsidies to the fossil fuel industry.

The Bloc does not have a national climate plan but supports policies aligned with Quebec’s provincial plan.

Over the past four years under the Pan Canadian Framework on Clean Growth and Climate Change, in full consultation with the provinces, territories, industry, civil society groups and the people of Canada, the Liberals have put in place a carbon-pricing backstop policy, as well as clean fuel energy standards, methane regulations, coal phaseout, and more.

They accomplished passing these policies in the face of strong headwinds from some provinces that are vehemently against science-based climate action.

The Conservative plan is obviously not in line with the science nor with 82 per cent of Canadians who say the climate crisis is a serious concern.

The NDP and Greens have ambitious plans for Canada. expert analysis by Dr. Katharine Hayhoe and Dr. Andrew Leach, as well as Dr. Chris Ragan indicate that the Liberals, although lacking in ambition have the most realistic implementation plan given the logistical and legislative challenges facing the country today.

Voter options are to choose between candidates whose parties offer strong ambition but lack realistic implementation strategies; realistic policies with less ambition; or weak policies that match a lack of ambition.

Superimposed on that will be the complexities of the casting of the first-past-the-post ballot in a country with multiple political parties.

The youth and the world will know how Canadian voters weighed their options most likely by the end of the day on Oct. 21, the press release said.