The trash talk among city councillors took almost two hours, Nov. 16, but residents of Greater Sudbury will be able to continue with a three-bag limit for garbage collection.
0
Nov 17, 2011 9:09 PM By: Arron Pickard 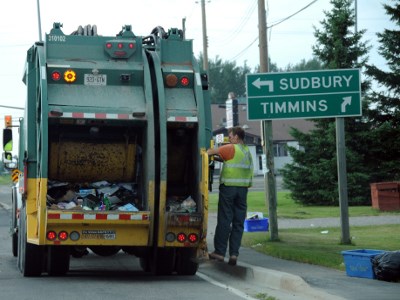 The trash talk among city councillors took almost two hours, Nov. 16, but residents of Greater Sudbury will be able to continue with a three-bag limit for garbage collection.

Decreasing the limit to two bags per week was one of 11 recommendations from the city's Solid Waste Advisory Panel, whose mandate is to function as council's public liaison on solid waste management issues.

In 2010, the panel reviewed methods to increase waste diversion, such as the use of blue boxes and composting containers. In a report prepared by the panel, it was stated that 84 per cent of households in the city generate two garbage bags or less per week.

It was that information that encouraged seven of the councillors at the meeting to vote down the proposed decrease.

“This is a non-issue, and we would be doing more harm than good by pushing this forward,” Ward 2 Coun. Jacques Barbeau, who chairs the panel, said. “I recommend we leave (the limit) at three (bags).”

Some significant numbers were presented in the report, Ward 5 Coun. Ron Dupuis said. Having 84 per cent of households generating two garbage bags or less means there is no need to change a system that isn't broken.

“It's not perfect, but it's a good system,” Dupuis aid. “We have made some tremendous progress, and there are only a handful of residents who use three bags or more. We've done our work, and in two or three years, we'll see even more people using two bags or less.”

Kett said it's a recommendation whose time has come.

“People are still just not grasping the idea of recycling, and this will put pressure on them to put garbage where it belongs,” Kett said.

The panel reported that 45.7 per cent of recyclable items are still being placed in garbage bags. A decrease in the bag limit is “simply part of (the city)” trying to improve upon where it is right now, Kett said.

Councillors sent back several options to the panel for overhaul. The first recommendation deferred was to allow residents to apply to rent a truck to deliver their residential waste to the landfill during the tipping fee holiday to submit an application, something only allowed to non-commercial vehicles presently.

Ward 5 Coun. Ron Dupuis questioned the validity of this recommendation. He said it would make more sense to allow residents to borrow a truck from a neighbour or family member to transport their garbage. He said he would like that to be addressed in a new recommendation from the panel.

The panel will also revisit a recommendation to allow residents interested in using waste container storage bins to help alleviate bear/animal issues, and a recommendation to exempt non-profit volunteer organizations with a sports-related theme from the city's Biz Box Recycling program fees. Councillors said they would like to see all non-profit volunteer-driven organizations granted the same exemption.

Chantal Mathieu, manager of environmental services, said residents with any questions about any of the recommendations or changes are encouraged to call 311 for more information. She also said her staff would be willing to go out into the field to demonstrate to residents ways to dispose of their solid waste more efficiently.

“It's been 10 years since amalgamation, and a lot of changes have occurred,” Mathieu said. “We are always looking for more ways to divert waste.”

Changes that were approved include:

- a more active role by the city's environmental service division in facilitating waste diversion and recycling efforts at city facilities;

- no tipping fees for recyclable materials delivered to the city's recycling centre or depot, which will allow the industrial, commercial and institutional sectors to reduce overall disposal costs;

- the provision of curbside pickup for those sectors;

- the decrease in the price of big blue boxes to $10 from $17 during a truckload sale in 2012 and 2013; and that residents be asked to place their leaf and yard trimmings in a garbage bag or container.