City needs to get passionate about preserving past

BY TRACEY DUGUAY There are close to 150 communities listed as having a municipal heritage committee, according to the Ontario Ministry of Culture website. Greater Sudbury isn’t one of them.
0
Nov 9, 2007 1:38 AM By: Sudbury.com Staff 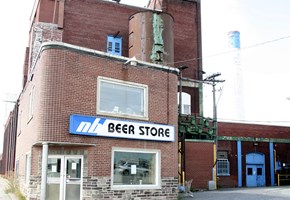 Lots of citizens had good ideas about how to use the empty brewery but no money.

There are close to 150 communities listed as having a municipal heritage committee, according to the Ontario Ministry of Culture website.

Greater Sudbury isn’t one of them.

With the recent sale of the Northern Breweries building on Lorne St., the need for a local heritage committee is once again on the minds of those with a passion for preservation.

“I would hate to just see it gone,” said musician Mark Browning of the band OX.

Browning contacted Northern Life after hearing about the sale of the old brewery in September. He was interested in buying the building, but with his touring schedule, he didn’t have enough time to pursue it.

Browning wanted to turn the top floors into lofts or apartments and transform the main level into some type of retail space or even a microbrewery.

“Something kind of funky with a younger vibe upstairs and the market (along the lines of Kensington Market in Toronto) downstairs.”

The singer is worried the new owners might demolish the building and another piece of Sudbury’s history will be lost. Northern Breweries has occupied that piece of land since 1906.

“I really care about that stuff. It really bothers me – after doing all the travelling that I’ve done and living in other cities – when I come back to Sudbury and look at the downtown and see what it is now. Then I look at old pictures and there’s so many old buildings I wish were still there.”

Browning realizes the building needs upgrading in order to bring it up to standards, but he just doesn’t want to see it torn down.

“Even when I was thinking of buying it, I was going to make changes but I wanted to leave as much of the building intact as I could.”

Ward 1 Councillor Joe Cimino shares his sentiments. Following the sale of the brewery building, Cimino said he too would like to see the core structure remain intact.

“I’d like to keep some component of the building as is,” he said. “That centre piece I’d like to definitely see stay up.”

There hasn’t been a heritage building committee in Greater Sudbury since the now-defunct Local Architectural Conservation Advisory Committee (LACAC) in the 1990s. During its heyday, this committee published a booklet listing 18 buildings it thought were important to the preservation of the community’s history.

Six of those buildings already had official heritage designation (see sidebar), while the other 12 were more of a wish list. One of the six designated buildings, the D’Youville Orphanage, was torn down, despite its status.

The Xavier St. orphanage was demolished in 2005 after falling into such a state of disrepair, the Roman Catholic Diocese of Sault Ste. Marie couldn’t afford to maintain it. The land is now used as a parking lot.

However, the heritage designation meant the diocese had to go before council to get permission to demolish it, but not before every effort was made to find a funding partner to help renovate it, albeit unsuccessfully.

One of the 12 buildings that made it on the wish list – the Bisset Residence (Larch and Lisgar St.) - was also demolished in favour of a parking lot.

Since the publication of the booklet, the Belanger House in Azilda has also received heritage designation, bringing the number of buildings back to six.

According to the Ministry of Culture website, in April 2005, the Ontario Heritage Act was “strengthened to provide municipalities and the province with enhanced powers to conserve Ontario’s heritage.”

Following the revisions to the act, the province created toolkits to help municipalities establish heritage committees and designate heritage buildings.

The process usually starts with a few private citizens expressing an interest in creating a committee. A minimum of five members is required by the provincial government, said Guy Lepage, media relations officer for the Ministry of Culture.

“Once someone comes up with a list [of interested people], you go to the municipality and tell them you’re interested in setting up a municipal heritage committee,” Lepage said.

If council agrees, an advertisement is placed in local media seeking applications from other parties interested in joining the committee, similar to the process for any city committee or group.

Lepage said the next step would be for the group to work with the clerk’s office to establish terms of reference and develop an operating budget, which would have to be approved by council.

While this is the recommended process, a city councillor can also lead the charge for the formation of a committee. According to North Bay Heritage Building Committee chair Peter Handley, it was a former mayor who was the impetus for their committee.

Handley also said money shouldn’t be a factor either in the creation of a committee because the charge to the city budget is minimal.

“You can run a heritage committee on very little money. It doesn’t have to be a large budget item at all. Our budget is less than $3,000 a year.”

Once the committee is established, under the Ontario Heritage Act, council can pass a bylaw to formally designate a building, or part of it, as a “property of cultural heritage value or interest.”

But, without anybody stepping up to spearhead the process, Greater Sudbury is lagging behind other communities – large and small – that have already taken an active role in preserving their history.

“I don’t think anyone has done their homework on it,” said Jim Fortin, the city’s curator of heritage museums. “There hasn’t been a request to city council as of yet.”

Fortin said people have approached or called him numerous times over the years asking about the designation process or to find out what buildings have been designated.

Sometimes it’s a private homeowner who wants to find out about their own property, while other times, the enquiry is in response to a building that is for sale or has just been sold, as in the case with Northern Breweries.

Given the geographical size of Greater Sudbury, Fortin said he thinks spearheading a committee to compile a list of all possible heritage buildings is just too daunting a task for most people. As well, many people are just interested in one area, like downtown Sudbury, but not others in the outlying communities.

Cimino believes the idea of a forming a committee, rather than dealing with individual requests, is a good one because it takes a proactive approach to planning. The timing is good too since the city is already undertaking the same type of process when it comes to green spaces.

“We’re doing the same thing with our natural lands. We’re looking at what lands that we as a community think should be preserved. This same type of inventory could be done with historical buildings.”

It took a few attempts in North Bay before its municipal heritage committee was created, and not before the city decided to take a slightly different approach.

“Our route was we would recognize historical buildings but we would not designate,” explained Handley.

He said one of the major stumbling blocks in going the full designation route was people were uncomfortable with the thought of the government telling them what they could do with their property.

“It was a compromise so we could get something going,” he said. “Although we have no real authority, we have what I call moral suasion.”

Regardless of whether this community goes for full heritage designation or only informal recognition, Handley stressed the need to take some type of action.

“I wish Sudbury the best. I hope they come up with something whether it’s full designation or whether it’s recognition. But the thing to do is to do something,” he said.

“It might be easier to get started on small scale like we did and carry on from that because the longer you leave it, the more buildings of historic interest you’re going to lose.”