The city will start issuing public alerts the next time there is a sewage bypass into a local lake or river, an event that has occurred regularly in Greater Sudbury in recent months.
Nov 6, 2014 8:51 PM By: Darren MacDonald 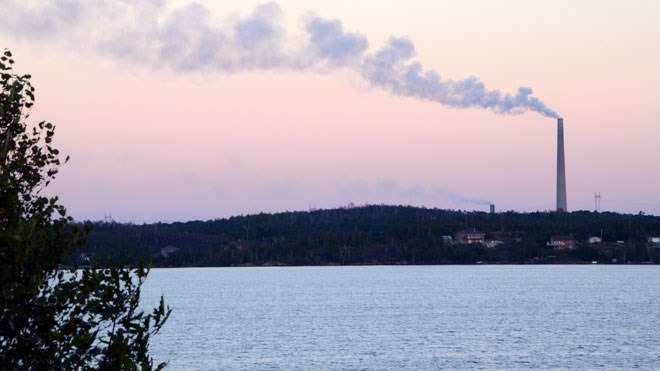 On Oct. 16, 7,710 cubic litres of sewage entered Whitewater Lake in Azilda through a ditch, although a staff report on the incident said disinfection procedures were completed during the event. File photo.

The city will start issuing public alerts the next time there is a sewage bypass into a local lake or river, an event that has occurred regularly in Greater Sudbury in recent months.

Meeting Tuesday, city council passed a motion from outgoing Ward 2 Coun. Jacques Barbeau, who said he has pushed for an alert system for some time, based on a similar policy in Kingston. Currently, he said, such events are not made public until three months after they have occurred.

“We have discussed for a long time the need to report these incidents more quickly to the public,” Barbeau said. “And to this day, that hasn't happened.”

There were 11 such events in October alone, when heavy rains caused flooding problems across the city. When the city's drainage system is overwhelmed, raw or partially treated sewage is dumped into rivers or lakes – although not into areas where the city draws its drinking water.

Most events are relatively minor, although five of the bypass events in October were deemed major or moderate. The most severe of those events took place Oct. 15, when a total volume of 325,058 cubic metres of raw sewage went into Junction Creek, although a city report says it was screened and partially disinfected.

The reasons for bypasses are heavy rains and equipment failure, as well as residents who have illegal hookups to the system. With climate change, these types of incidents are expected to be more common, Barbeau said.

“While some staff I have spoken with see (the alerts) as a negative thing, that we would be advertising the fact we have a bypass, I think that's the furthest thing from the truth,” he said. “Now, more than ever, people are in tune with ... the need to protect our lakes, to reduce the number of blue green algae blooms we have.”

The blooms thrive in nutrient-rich lakes, and sewage is full of such nutrients. While rivers such as Junction, Coniston, Whitson and Meatbird are most commonly affected, lakes such as Whitewater and Simon have also been affected.

For example, on Oct. 16, 7,710 cubic litres of sewage entered Whitewater Lake in Azilda through a ditch, although a staff report on the incident said disinfection procedures were completed during the event.

Both Whitewater and Simon Lake was similarly affected May 15 during a heavy rainstorm. Barbeau said residents living on or near the lakes should be informed about what's going on.

“It should be very simple to alert the public to the fact that we've had a bypass,” he said. “People who are living in these areas need to know when it is happening and if they need to avoid these areas where we have a water treatment plant, they can do that. Three months after the fact is not very responsible reporting.”

Ward 4 Coun. Evelyn Dutrisac, whose ward includes Whitewater, said she and the Azilda Community Action Network are working with city staff to create a steering committee to educate the public about the bypasses, and the fact illegal hookups to the city's system aggravates the problem.

“Our lakes are our treasures,” she said. “People need to know when there is a sewage bypass. And people have to stop these illegal hookups that are polluting our lakes.”

“We need to get more aggressive with people who are hooked up illegally,” Barbeau agreed. “Due to these bypasses, the (algae) problems we have on Simon Lake are not improving. In fact, it's probably getting a little worse.”

The city should be alerting people “in real time” about bypasses so people living beside or downstream from the affected bodies of water know what is going on.

“Right now, they're getting information that is three months old,” he said. “We can certainly be leading the way by … getting real-time information out there.”

More details and a copy of the monthly reporting of such events can be found at www.greatersudbury.ca/living/sewer-and-water/wastewater-treatment/stewardship/