City to take a closer look at winter sidewalk maintenance 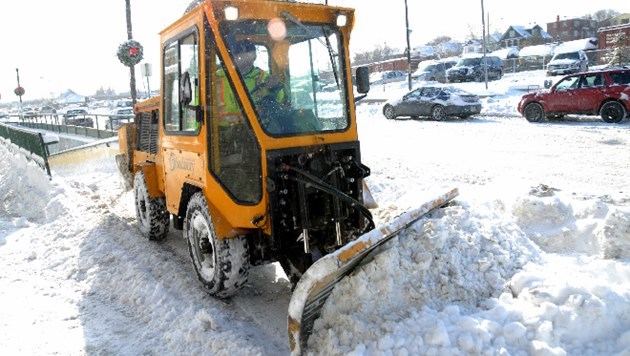 Changes could be coming to how the city of Greater Sudbury maintains its network of sidewalks during the winter months. (File)

Changes could be coming to how the city of Greater Sudbury maintains its network of sidewalks during the winter months.

Ward 8 Coun. Al Sizer tabled a motion during the finance and administration committee meeting on Feb. 16 that will direct staff to prepare a study of service delivery models for winter sidewalk maintenance.

Changes to sidewalk maintenance would not occur this winter, as the study isn't expected to be completed until August 2021, and Sizer believes that depending on council direction, the service model could see some adjustment come January 2022.

Ward 4 Coun. Geoff McCausland spoke in favour of the motion, noting council's goal of promoting an active transportation network within the city.

"The expectations for sidewalks in the winter have risen dramatically, which I think is fantastic," said McCausland. "It means that people are out being active, especially this year more than ever before. We're still doing things based on the way it was done years ago because it was the cheapest way to hit every sidewalk in the shortest amount of time."

It has been more than 15 years since the city did a major review of how they clear sidewalks, though it's been a regular topic of discussion at the council table.

"The last major review of snowplowing was around 2005; it established the service levels that we continue to follow for the most part on both winter sidewalks as well as winter roadways," said Tony Cecutti, manager of growth and infrastructure.

"Winter sidewalks has been the subject of conversation pretty much every year that I've been at the city and that's a very good thing. We'll be bringing forward a summary report sometime this year with the work we've done on active transportation. It's incredible what we've done in the last five years with the leaps we've made with cycling and pedestrian activity."

There were small changes made to sidewalk maintenance in both 2015 and 2017 when the city increased the scope of its sidewalk network that would be plowed during the winter months.

"Two years ago, we enhanced the standard for sidewalk maintenance in the downtown area that would allow us to do a little more work on snowbank removal," said Cecutti.

The study being requested by Sizer would look deeper than just the geographic area the city plows, but rather what's being done in other parts of the country with regards to service levels and standards.

Ward 1 Coun. Mark Signoretti was in favour of the study, but cautioned council of the financial implications of service level adjustments.

"I'm all for analysis, but we also have to be cognizant that there's a balance; we need the services but it comes at a cost," said Signoretti. "How much of a cost are we willing to absorb, especially in this climate that we're in and the budget constraints that we're in."

The motion was passed unanimously by the Finance and Administration Committee and will be brought to council at a later date for ratification.

Full text of the resolution is as follows:

Therefore be it resolved that staff prepare a study of service standards and service delivery models for winter sidewalk maintenance before the end of August 2021, with recommended service level options for potential consideration as a possible business case as part of the 2022 budget deliberations, including but not limited to reviewing: snow accumulation to initiate operations; continuous plowing practices; priorities for the sidewalk network; service models and best practices for other cities; and alignment with active transportation policies and the goals of the Community Energy and Emissions Plan.