Details of the project have been posted to the city's website (www.greatersudbury.ca/living/roads/second-avenue).
Mar 25, 2015 10:03 PM By: Darren MacDonald 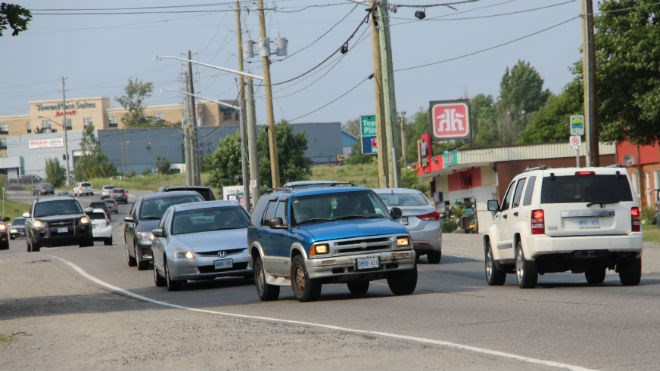 The 4.6 million Second Avenue project will combine the entrance to the Civic Memorial Cemetery and the Minnow Lake Dog Park, and align the new entrance across from Scarlett Road, where a traffic light will be installed. The project was revised in 2014 to move up planned drainage work, allowing it to incorporate raised bike lanes along both sides of Second Avenue. File photo.

Details of the project have been posted to the city's website (www.greatersudbury.ca/living/roads/second-avenue). The project will widen Second Avenue to five lanes from Donna Drive to Scarlett Road, and three lanes from Scarlett Road to Kenwood Street.

City staff have said the five lanes are needed because of heavy traffic counts along that stretch of Second — 15,000 vehicles a day — as well as the added traffic demands of future residential construction planned in Minnow Lake.

The project will combine the entrance to the Civic Memorial Cemetery and the Minnow Lake Dog Park, and align the new entrance across from Scarlett Road, where a traffic light will be installed. The project was revised in 2014 to move up planned drainage work, allowing it to incorporate raised bike lanes along both sides of Second Avenue. The bike lanes will connect from Donna Drive to Bancroft Avenue.

Second Avenue is currently a two lane secondary arterial road that runs north-south from Bancroft Drive to The Kingsway. While there have been calls for a roundabout to be installed instead of traffic lights, the staff report said it wasn't suitable for the roadway.

“Although there are some benefits to a roundabout compared to a signalized intersection, they do not outweigh the increased construction costs, the impact to adjacent property owners (Cemetery and commercial mall) and the decreased safety for cyclists,” the report said.

Other elements of the project include:

– A sidewalk and curbs on both sides of Second Avenue;

– A storm sewer to correct drainage issues;
– Removing the pedestrian traffic signal between the former high school and the park as new traffic signals are proposed at Scarlett Road; and,

– Bus bays to make it easier for Sudbury Transit users to get on and off the bus.

The city filed formal responses in response to the two complaints – that the project would increase pollution from vehicles and a wider road would mean more road salt and other contaminants would end up in Ramsey Lake.

On the first, it said the work is being done to ease existing traffic congestion but is not expected to significantly increase traffic.

“Overall, traffic volumes forecast for the year 2031 ... is expected to remain close to existing 2011 traffic volumes,” the report said. “The road widening provides additional capacity and reduces congestion. Traffic congestion is a major contributor to air emissions. Based on the road widening and the forecasted traffic levels, a significant increase in air pollution in not anticipated.”

The project is expected to add 7,500 square metres of road that will require salt and snowplowing in winter, increasing storm water runoff by less than five per cent, the report said. And there's a parallel process ongoing, with a watershed study planned for this year.

“The watershed study will include state of the art and best management practices for storm water management and treatment, and a prioritization and implementation plan of treatment improvements for Ramsey Lake,” the report said.

“While the Second Avenue project is located in intake protection zone 3, there are two other zones within the watershed with a likely higher storm water treatment priority. The actual priority will not be known until the watershed study is complete.

“The city is proposing to complete the watershed study, determine a prioritization and implementation plan, so that the investment in storm water treatment can be maximized.”

The city hopes to issue tenders for the work next month, with construction running from May until October. Finishing work on the road will be completed next summer.