City's proposed winter storm policy aims to inform you, and protect itself

City will declare a 'significant weather event' to alert residents – and as protection from lawsuits
Aug 13, 2019 11:53 AM By: Darren MacDonald 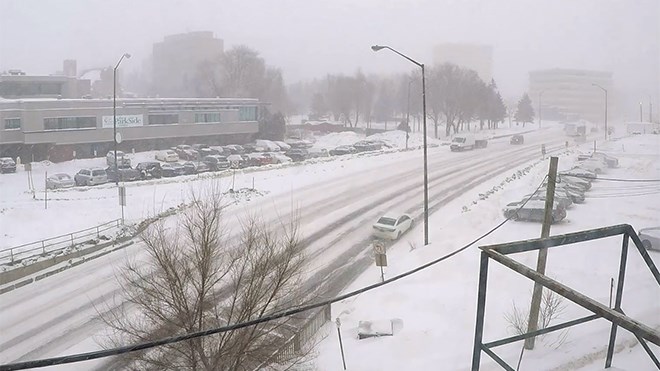 When a severe storm hits the city this winter, a new policy will see Greater Sudbury declare what's being called a “significant weather event,” alerting residents of increased hazards. (File)

When a severe storm hits the city this winter, a new policy will see Greater Sudbury declare what's being called a “significant weather event.”

Tony De Silva, a roads operations engineer with the city, told members of the operations committee Monday morning the declaration is aimed at alerting residents of increased danger of venturing out on the roads when a major snow or freezing rain storm makes driving dangerous.

In addition, the declaration will give staff a legal defence should the city be sued because it hasn't met the minimum maintenance standard (MMS) for keeping the roads clear. Those standards detail how quickly and how often it clears transportation infrastructure (roads, sidewalks, bike paths, etc.) during a storm so they are safe for the public to use.

An example of when such a defence may come into play happened in 2017. Greater Sudbury was held liable for $12 million in damages for a November 2000 crash near Cambrian College that left a local woman with profound injuries. The judge in that case relied on the city's standards for road maintenance.

The road where the accident occurred had been treated the day of the crash with road salt and plowed around 7:15 a.m. But warning of a major snow storm was issued around 8 a.m., with about 5 cm of snow falling between 8-11 a.m. The snow washed away the road salt and, by the time the road was plowed again around 10:15 a.m., two city salt spreaders had broken down. While a replacement spreader headed out around 10:45 a.m., it hadn't reached the area when the crash occurred around 11 a.m., and the city was held liable.

“Much like the rest of the province, Sudbury has experienced more intense and unusual weather conditions in recent times,” De Silva's report to the committee said. “One important amendment to the MMS addresses these changes in weather by allowing municipalities to declare a (SWE) with implications on winter maintenance on roadways, bicycle lanes and sidewalks during the duration of such an event.”

Any severe storm that makes it hazardous to use local roads would qualify. A “weather hazard,” the report said, will be determined by Environment Canada's criteria for the issuance of an alert under its Public Weather Alerting Program.

Randy Halverson, the city's director of linear infrastructure, said a draft policy for declaring a SWE is nearly complete and will come to the committee before winter. Once approved, city workers will be taught how and when to issue the declaration.

"We will be sitting down with staff to ensure there's consistency across the board about how we are going to apply it consistently,” Halverson said.

The new policy will come into effect this winter, and will include a communications plan to ensure the public is informed.

Ward 9 Coun. Deb McIntosh said that plan should roll out well ahead of the winter season to ensure "there's a better understanding (among resident about what it means), so 311 and councillors don't receive phone calls."

In addition to the SWE policy, the committee got an update on a report coming in September on speed limits on local roads. Cities now have more options to lower the speed limit to 40 km/h in certain designated zones.

"The report will be coming forward in September and it will discuss the implications of the new ability municipalities have to designate areas at a lower speed limit," Joe Rocca, traffic and asset management supervisor, told the committee.

BEYOND LOCAL: Coronavirus misinformation is spreading — what is Canada doing about it?
Aug 8, 2020 6:00 PM

Woman in her 20s tests positive for COVID-19, bringing total to 92
Aug 8, 2020 12:20 PM
Comments
We welcome your feedback and encourage you to share your thoughts. We ask that you be respectful of others and their points of view, refrain from personal attacks and stay on topic. To learn about our commenting policies and how we moderate, please read our Community Guidelines.