It’ll be up to Natural Resources Minister Bill Mauro to decide if Cliffs Natural Resources gets permission for an overland transportation route into the Ring of Fire.
0
Aug 1, 2014 6:01 PM By: Northern Ontario Business Staff 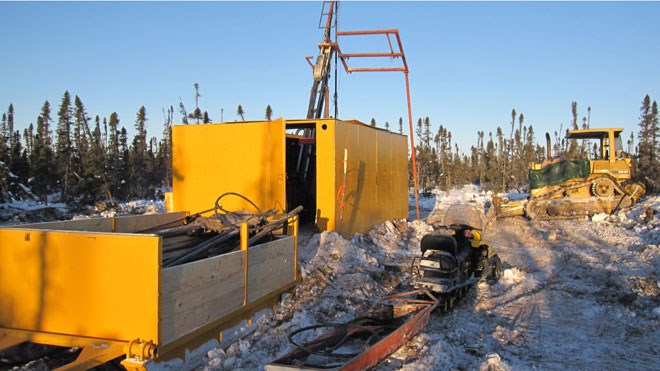 Since Cliffs Natural Resources announced in 2009 that it was a player in the Ring, the company has spent $485 million through to the end of 2012. This year's project budget is pegged at $50 million. File photo.

On July 30, an Ontario Divisional Court set aside a decision reached by the Ontario Mining and Lands Commissioner last September that denied Cliffs an easement for a road to reach its Black Thor chromite deposit atop the mining claims of a rival company, KWG Resources.

Cliffs, which has halted all exploration on its chromite project, launched the appeal last October. The case was heard in Toronto, June 16-17.

The bone of contention with Cliffs has been over the use of surface rights by KWG to stake a 330-kilometre long corridor using mining claims from Nakina north to the exploration camps in the James Bay lowlands.

Cliffs contended that KWG was holding other mining companies hostage by blocking a critical path into the region.

KWG, through its Canada Chrome subsidiary, wants to use the corridor for a future railroad.

KWG also has a 30-per-cent stake in the Big Daddy chromite deposit that it shares in an adversarial relationship with Cliffs.

In its ruling, the Division Court said: "Whether or not it is in the public interest to grant an easement for a road is a matter for the Minister of Natural Resources to determine, after an environmental assessment and consultation with First Nations and other affected interests. It is for the Minister to determine whether the easement should be granted in the public interest and on what terms.”

Mauro will have to make a precedent-setting decision that could potentially kick-start mining and infrastructure development in the Far North.

The court said under Section 51(4) of the Mining Act, KWG-Canada Chrome will be a participant in that process at the next stage to either oppose Cliffs’ easement application or ask for certain conditions that protects its interests.

Counsel for KWG is reviewing the Divisional Court’s judgment.

In a release, Bill Boor, Cliffs’ vice-president of corporate development, said the decision was an “encouraging development” toward making progress on building infrastructure to reach the Far North mineral deposits.

Boor said the mining tribunal’s original decision “created an unnecessary barrier” that held up development in the region for mining companies and First Nations.

“Basically, the Divisional Court ruled that the owner of mining claims has a right to explore those claims, but does not have surface rights to use the surface for any purpose or block others from using the surface for legitimate purposes.”

Boor said that barrier has now been removed.

“Beyond our project, or even the Ring of Fire, this decision clarifies important issues of law under the Mining Act that otherwise could have had significant negative ramifications for development of any mining claims in Ontario.”

The company is awaiting a development plan to be put forward by the province. The Wynne government pledged to formally establish a Ring of Fire development corporation within 60 days of its July 3 throne speech and has backed that up with a $1 billion commitment for infrastructure.

However, Cliffs’ own future in the Ring of Fire still has to be cleared up.

The day before the court ruling, the mining giant was winning in court, a New York hedge fund was successful in gaining majority control of Cliffs’ board of directors.

A shareholder ballot recount has been ordered, but if the Casablanca Capital is successfully the hedge fund wants to break off Cliffs’ international assets, including its Ring of Fire properties, from its core U.S. iron and coal properties.

Casablanca wants to oust CEO Gary Halverson and replace him with Lourenco Goncalves, a former CEO at Metals USA.