'We want to teach people the skills they need to be part of the community,' says executive director
Nov 16, 2019 2:45 PM By: Arron Pickard 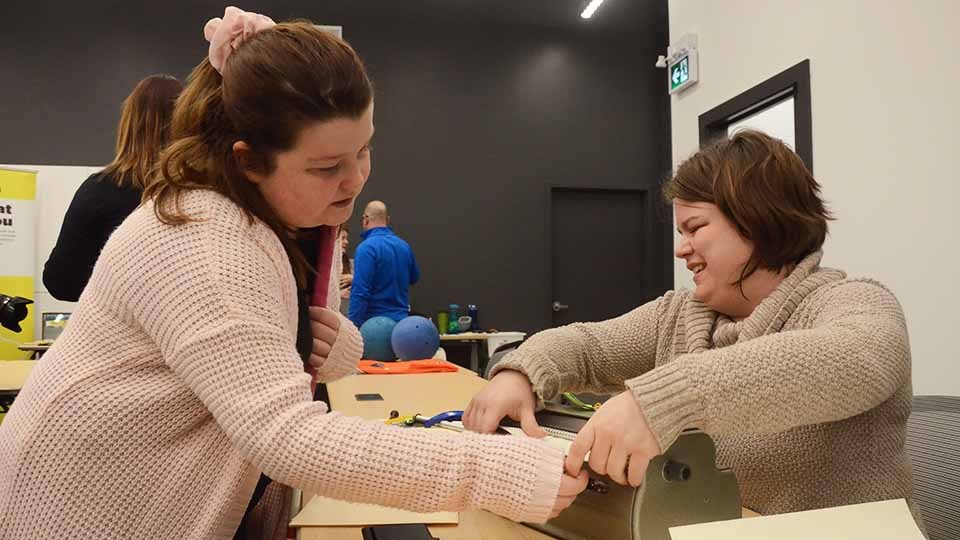 Alicia Chenier gets a lesson in Braille from Stephanie Pilon, program lead, Children and Youth Engagement, for the CNIB, during the grand opening of their community hub on Regent Street. (Arron Pickard/Sudbury.com)

The CNIB celebrated the grand opening of its community hub on Thursday, welcoming its clients and guests and showing off some of its services.

Previously located on York Street, the new location is more central and provides a safe and accessible space for people who are blind or partially sighted where they can access programming, said Robert Gaunt, executive director, CNIB Foundation Ontario North and Ontario West.

“It is also a way for people to come together and share experiences and knowledge with other people who are blind or partially sighted, because learning how someone else has overcome a particular challenge you face will go a long way in helping,” he said.

“Whether they're new to vision loss, or have been dealing with it for a long time, we are educating them about the technology and tools available to them to help them in their lives.”

For example, the CNIB has a phone-it-forward program that takes old smartphones, gets them repaired, then loads them with accessible apps and puts them in the hands of people who are blind or partially sighted.

The new community hub has been open since July but celebrated its grand opening on Nov. 14. The hub is home to both the CNIB and Vision Loss Rehabilitation Ontario, as well as the Eye Van program.

The CNIB had been located on York Street since the 1960s.

“It has served its purpose and its time, Gaunt said. “We've evolved since then, and we're more about integration now. That's why we've moved to this new space. We want to teach people the skills they need to be part of the community and to not only participate but give back to their community.”