“We're waiting for what they call a determination of eligibility,” Jeffery said.
Mar 31, 2014 8:18 PM By: Jonathan Migneault 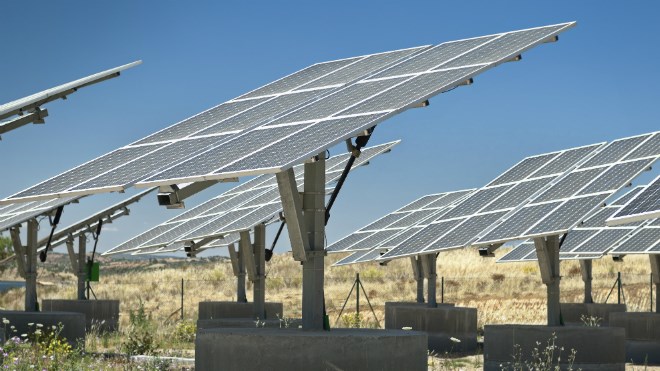 Bob Jeffery, vice-president of the SUN Co-operative's board of directors, said the organization's planned solar farm, located near the former Murray Mine site, would resemble the one pictured. Supplied photo.
“We're waiting for what they call a determination of eligibility,” Jeffery said.

If the Ontario Power Authority deems the project eligible for the FIT program, the SUN Co-operative (for Sudbury Unlimited eNergy) can then secure a contract for power generation, and contact suppliers to build and install the needed solar panels.

The FIT program has not been without its detractors. In 2013, the Fraser Institute released a report called “Environmental and Economic Consequences of Ontario’s Green Energy Act” that concluded the FIT program rates help create excess green-energy production – especially from wind generators – the province must export at a loss.

“Feed-in-Tariff (FIT) rates distort the energy-supply decision by inducing excess production of unnecessary and costly wind power, then the Clean Energy Benefit and the large-user subsidy distort the consumption decision in a partially offsetting way,” the report said. “These price distortions waste tax revenues and create excess burdens throughout the economy.”

SUN Co-operative plans to generate 500 kilowatts of energy through the project – or enough electricity to power 30 homes.
At current FIT program pricing, a non-rooftop solar project over 10 kilowatts would receive a guaranteed rate of 28.8 cents per kilowatt hour.

As the efficiency of green technologies has improved, the Ontario Power Authority has decreased the guaranteed rate of return, meant to encourage more clean-energy production.

But Jeffery said the co-operative is not deterred by the reduced rate.

The group initially had plans to lease around 60 acres of Vale-owned property along Nickel Mine Road, where former slag pits were reclaimed with soil and sod.

But the co-operative later decided to downsize to a smaller property, near the former Murray Mine site, about a few acres in size, which Vale has leased at a “nominal” fee.

Jeffery said the smaller size will be sufficient for a 500-kilowatt solar farm, but any expansion would require more land.
So far, the co-operative has attracted 75 members, who have each paid a $25 fee to be part of the project.

Members are encouraged to invest up to $1,000 in the venture, with a nine-per-cent return once things are up and running.
The co-operative has also secured funding from Sudbury's labour movement, and Bullfrog Power, Canada's leading green-energy provider.

“SUN Co-operative's Vale project is Bullfrog Builds' first in Northern Ontario and we're excited to be part of a project that not only changes how the land will be used, but also provides an example of what is possible for local, clean power co-ops across Canada,” said Ron Seftel, Bullfrog Power's senior vice-president of operations, in a release.

If the 500-kilowatt project becomes profitable, Jeffery said SUN Co-operative would like to expand to a larger solar farm through the Ontario Power Authority’s upcoming Large Renewable Procurement program, meant for projects larger than 500 kilowatts.

“The main objective is to increase the supply of renewable energy,” Jeffery said.

Beyond green energy production, Jeffery said the co-operative would like to assist other green organizations in Sudbury with whatever profits it can generate.

SUN Co-operative is affiliated with reThink Green, an umbrella organization that includes a network of 13 green organizations in Sudbury.

Jeffery said any one of those groups could benefit if SUN-Co-operative's solar farm is a success.

“It may not be all green energy, but green and environmentally sustainable activities,” he said.