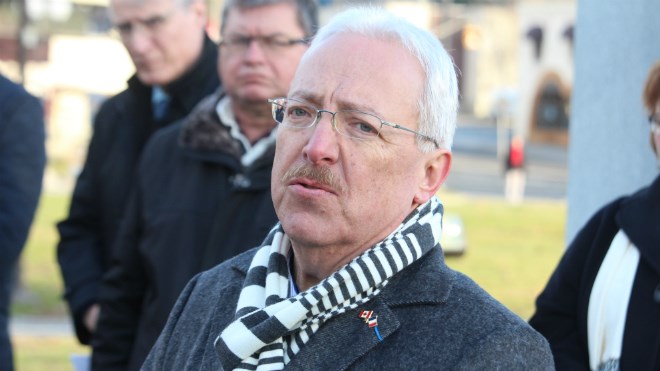 A Laurentian University professor who lost his position as part of the university’s insolvency restructuring this spring says he expects to receive “peanuts, basically” when he finally sees some of the severance money he’s owed.

“That was the message that was unequivocal since the beginning,” said Jean-Charles Cachon, who taught business at Laurentian until he was forced to retire as part of the university’s cuts this spring.

“That has been told to us since the month of February. The term used was cents on the dollar. But there is no indication whether it will be half a cent or two cents. I mean basically there will be nothing for people who are shaping this institution.

“I’m not expecting anything really substantive, and unfortunately, for people who are in the middle of their career, and who should have been receiving proper compensation, unfortunately this is not going to happen.

“That’s the most terrible part of all of this. There is no way people can recoup anything.”

Cachon, now known as a professor emeritus in the faculty of management, is also the former secretary-treasurer of the Laurentian University Faculty Association (or LUFA).

Sudbury.com also reached out to LUFA president Fabrice Colin, but had not heard back as of this article’s publication.

Cachon said he doesn’t expect to see any money from his former employer until 2022. “If we talk about payments, and whenever people will receive even the smallest amount of compensation possible, that won’t happen until next year,” he said,

Lawyers for the university and unions representing the 194 full-time workers who were laid off are still currently in negotiations regarding the methodology by which the workers’ compensation claims will be calculated.

The workers laid off by Laurentian this spring include 116 full-time faculty positions (members of LUFA), 41 unionized staff (members of the Laurentian University Staff Union, or LUSU) and 37 non-union jobs (24 of which were in management and executive positions).

The former Laurentian employees seeking their severance pay will undergo a separate process than the rest of Laurentian’s creditors, who have been asked to submit claims against the university by July 30.

A court order issued at the end of May as part of Laurentian’s Companies’ Creditors Arrangement Act (CCAA) proceedings says Laurentian’s lawyers are to bring a motion back to the court regarding how employees will be dealt with no later than July 30.

The motion will seek approval of the compensation claims methodology for the employees, as well as the process for notification employees and claim processing.

Union officials tell Sudbury.com that claims against Laurentian will be submitted on behalf of the terminated employees once the methodology is worked out.

“There’s still a conversation going on with our legal counsels right now as to what that will look like.” he said.

Once this is accomplished, the first step in the process will be to determine how much the employees are actually owed, and the second is how much is in the pot to hand out.

“You have to remember they’re in there with banks and all kinds of other groups, right?” Fenske said.

He said he’s let his members know that a claim will be put in on their behalf, and “no one’s going to miss a deadline … we’re making sure of that on our end.”

Cachon said the CCAA process, designed for private companies, is totally unsuited to how universities function.

He said his personal opinion is that both the federal and provincial governments have thrown Laurentian under the bus.

“They’re spending billions of dollars on private companies,” he said. “If we are treated like a private company, why don’t they bail us out as well? There are so many contradictions on what is going on right now. It’s insane.”