Competitive gaming not just for the boys

While gaming is a growing hobby for women, especially on mobile platforms like smartphones, female players remain a minority in “hardcore” games on consoles and PC like first-person shooters. But that hasn't stopped Sudbury's Jennifer Pichette.
Apr 2, 2016 12:16 AM By: Jonathan Migneault 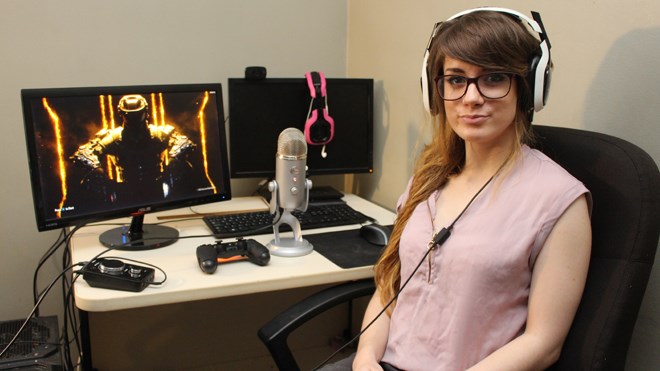 Laurentian University Masters of Medical Microbiology student has started to break into the world of competitive Call of Duty casting, giving the play-by-play for live tournaments. Photo by Jonathan Migneault.

While gaming is a growing hobby for women, especially on mobile platforms like smartphones, female players remain a minority in “hardcore” games on consoles and PC like first-person shooters.

Like many people her age, the Laurentian University Masters of Medical Microbiology student was introduced to gaming through Nintendo's colourful and kid-friendly Super Mario games.

But she later graduated to the hyper-masculine shooters of the Call of Duty franchise, where players control soldiers with the types of arsenals that would make James Bond envious.

In its two latest iterations – “Call of Duty: Advanced Warfare” and “Call of Duty: Black Ops III” –players can finally be female characters in the games' popular multiplayer modes.

But Pichette said she never minded playing as a male character.

“It was easy to pick up,” she said. “It was my first competitive game.”

As a competitive Call of Duty player, Pichette said she could go 20 games before hearing another woman's voice in the team chat.

When she first started playing, she said a lot of the guys were caught off guard when they discovered she was female. But comments about her gender have become more infrequent since then, she said.

As with professional sports, competitive gaming competitions are broadcast to live audiences – often on the popular streaming website Twitch and usually accompanied by commentators giving viewers the play-by-play and explaining some of the strategies on display.

Through her competitive gaming stint Pichette was exposed to the live commentating during games – or “casting” as its often called – and decided to give it a shot.

She found her years of theatre and improv training in high school, and her strong understanding of Call of Duty, helped make her a natural at casting.

As with competitive gaming itself, there are very few female commentators.

Pichette said her gender has become an advantage in that regard because it helps her stand out from other casters.

“Breaking into the scene has been a little bit easier for me,” she said. “Since I'm the only female they want to bring that new colour to the stream.”

Pichette uses the online moniker LemonKiwi for her casting and gaming-related persona.

She has travelled to a number of Call of Duty tournaments in the United States to provide the live play-by-play and discussions on strategy.

In late April she will host a Call of Duty tournament at Toronto's Enthusiast Gaming Live Expo.

Pichette has also worked with a dedicated group of female gamers to launch the Female Pro League, which is first all-female Call of Duty league.

Male competitive gamers are still hesitant to play with women, because they sometimes assume they aren't at the same level, Pichette said.

And while there is a skill divide, where the majority of the best players today are men, Pichette said the Female Pro League will give women a chance to hone their skills in a competitive environment so they can close that gap.

Twenty-five teams from around North America and Europe registered for the first season, and Pichette said there are already 35 teams (with four players each) signed up for next season.

The prize pool for the first tournament is $8,000, and she said it's already expected to be bigger next season.

As for her future in gaming, Pichette said it remains a serious hobby, where she dedicates most of her weekend time to casting and learning more about the game.

But her weeks are still dedicated to her studies, and for her career she said she still has her goals set on science.

But gaming will always be an important part of her life, she said.

Four new COVID-19 cases in Greater Sudbury, bringing area's total to 118
Oct 22, 2020 9:26 PM
Comments
We welcome your feedback and encourage you to share your thoughts. We ask that you be respectful of others and their points of view, refrain from personal attacks and stay on topic. To learn about our commenting policies and how we moderate, please read our Community Guidelines.