Dr. Theresa Tam said the two diagnoses involve a married couple from Toronto who returned from Wuhan on Jan. 22
0
Jan 28, 2020 9:00 AM By: Canadian Press 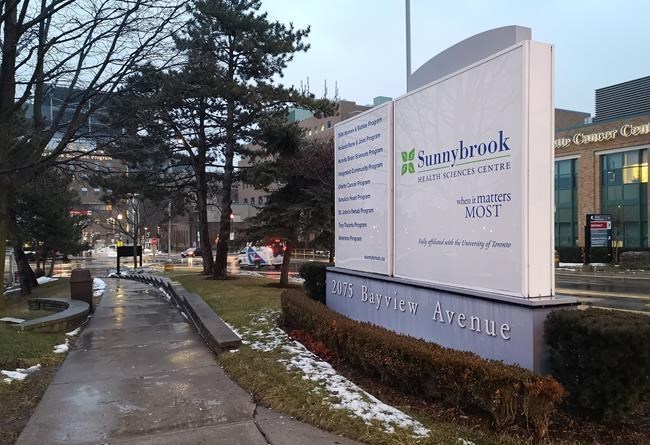 Sunnybrook Hospital is shown in Toronto on Sunday Jan. 26, 2020. Public health officials in Ontario say the wife of a man who is the province's first case of the new coronavirus has tested positive for the virus. They say the woman has been in self-isolation since arriving in Toronto with her husband. THE CANADIAN PRESS/Doug Ives

TORONTO — The Canadian government is now advising citizens against all travel to a Chinese province that's at the centre of a global outbreak of a new form of coronavirus, stepping up an earlier warning about the region.

On Monday afternoon the government updated its advice for travellers to say that Canadians shouldn't go to Hubei province at all.

"Avoid all travel to the province of Hubei, including the cities of Wuhan, Huanggang and Ezhou, due to the imposition of heavy travel restrictions in order to limit the spread of a novel coronavirus," the website stated.

The Chinese government cut transportation links to and from the city of Wuhan, at the centre of the outbreak, on Jan. 22 and has since expanded those controls to several nearby cities.

Anyone travelling from Wuhan is required to register and quarantine themselves for 14 days — the maximum incubation period for the virus.

The Canadian travel warning followed further reassurances on Monday from the country's top public health official that the risk from the disease remains minimal despite the discovery of a second presumptive case in Canada.

Dr. Theresa Tam said the two diagnoses involve a married couple from Toronto who returned from Wuhan on Jan. 22. A man in his 50s was confirmed as Canada's first official coronavirus patient earlier in the day, while the first of two rounds of tests indicates his wife has also contracted the illness.

Tam said the likely diagnosis of a second case has not changed her view that the risk of contracting the virus remains low in Canada, noting the two instances follow a reassuring pattern.

"Transmission of the virus is occurring among family members who have close and prolonged exposure to sick individuals," Tam said in a teleconference. "Canadians should not be concerned that they can pick up the virus from an infected individual by any casual contact, such as walking through the airport or another public place."

Some groups were already avoiding travel to China, with the University of Regina announcing earlier Monday that it has cancelled all China trips it had organized for the next three months due to the spread of the coronavirus.

Health officials in Ontario have said both the husband and wife who were diagnosed with coronavirus wore protective masks during the journey back to Canada, a step the medical community has said can be helpful in preventing the spread of the illness.

Tam said the man showed signs of a mild cough on the flight, and he and his wife both disclosed their recent travel history upon landing at Pearson International Airport.

Both federal and provincial officials have said the man sought hospital treatment for deteriorating symptoms the day after returning home, prompting paramedics to arrive on scene wearing protective equipment.

His status as the country's first prospective coronavirus case was announced on the weekend but confirmed on Monday by Ontario's senior public health officials.

Dr. Barbara Yaffe, the province's associate chief medical officer of health, said the confirmation resulted from tests at the National Microbiology Laboratory in Winnipeg. The man initially tested positive at a provincial facility, as did his wife days later.

The man remains at Toronto's Sunnybrook Hospital receiving treatment, while his wife is in "self-isolation" at home, officials said.

Yaffe said several other prospective patients have been tested at the provincial level in recent days, with coronavirus being eliminated in at least 15 cases. Results are still pending for 19 others, she added.

"The good news here is that there is ongoing, active monitoring," she said. "People are self-identifying and we continue to make sure the system is working."

Ontario's chief medical officer of health, Dr. David Williams, said the patients currently being tested reside throughout the province, though many are concentrated in Toronto.

Mayor John Tory said he's requested that all public health information related to coronavirus be translated into "languages other than English or French" to ensure the city's diverse population can stay informed.

"Be careful, be vigilant, but you don't have to change your life at the moment," he said.

Federal officials said Sunday they were reaching out to passengers who travelled on the same China Southern Airlines flight with the couple and sat within two metres of them.

Williams said those who are not currently exhibiting the flu-like symptoms consistent with coronavirus are likely not contagious.

"If somebody does not have symptoms, they usually are not shedding," he said, adding researchers are continually studying the virus and becoming more familiar with its characteristics.

The new form of coronavirus, a close cousin to respiratory illnesses such as SARS and MERS, originated in China and has spread rapidly in recent weeks.

Officials in that country have reported the illness has killed at least 106 people and infected more than 2,750 others. Several countries throughout Asia, Europe and North America have also confirmed cases of the illness. It remains to be seen whether the virus is as dangerous as the common flu, which kills thousands every year in Canada alone.

Yaffe said all cases outside of China so far include a travel history to that country, adding that Ontario emergency dispatchers have now been instructed to ask about that issue while screening calls from those showing signs of a respiratory illness.

Tam said a committee including officials from federal, provincial and territorial governments will be established on Tuesday to help share information.

This report by The Canadian Press was first published Jan. 27, 2020.

—With files from AP