City councillors, including as Ward 8 Coun. Ted Callaghan, argued for and won a vote on boosting the redeveloped Grace Hartman amphitheatre seating from 1,750 seats to 1,950 hard and grass seating spaces.
Apr 1, 2010 8:50 PM By: Bill Bradley 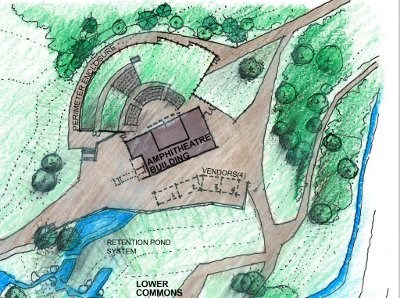 This sketch of the new Grace Hartman amphitheatre will be changed slightly as city council voted to increase the amount of seating. Supplied image.

City councillors, including as Ward 8 Coun. Ted Callaghan, argued for and won a vote on boosting the redeveloped Grace Hartman amphitheatre seating from 1,750 seats to 1,950 hard and grass seating spaces. They also agreed to do preliminary work for a future roof over spectators.

Demolition on the former amphitheatre site is now complete and new construction should commence by August 1 at the latest, Chris Gore, manager of community partnerships said. By February 2011, most of the work would be complete. Aside from some final touches, such as final landscaping, the site should be ready for user groups by the summer of 2011, he added.

The new amphitheatre design would include 450 hard or arena style seating and 1,500 more spots on the grass where people could sit or use their own lawn chairs.

But Callaghan fought for another 400 hard seats since that is what he said user groups wanted. That would cost an estimated $300,000 extra to prepare the site for more hard seats.

It did not include the actual cost of the seats themselves. It would mean the number of grass seats would be decreased since the total number of seats would remain the same at 1,950.

The money could come from a city proposal now with the Northern Ontario Heritage Fund Corporation that is awaiting approval, or, failing that, the money would have to come from a reserve fund from the parks department.

Architect for the project, Dennis Castellan, said adding too many more seats, over the original 1,750 figure, would compromise the look of the site.

He said he designed the amphitheatre seating arrangement and slope to fit in with the natural contours of the site. Two hundred extra seats, or a total of 1,950, would be about the maximum the site could handle without changing the aesthetics of the project, he said.

Paul Loewenberg, artistic director for Northern Lights Festival Boreal, said for his festival, a larger amount of seating would be necessary to be able to attract higher quality performers.

He mentioned a figure of closer to 2,500 as being a better option. That would involve moving the amphitheatre structure to the south  down the slope so as to provide more space for seating.

He did not agree with Brian Amott, the Novita senior partner charged with doing a business case for the project, who said most user groups, including the larger festivals, were supportive of what seating was proposed.

“Are we going to make the same mistake we made with the hospital — not build it big enough?” Loewenberg asked.

Another issue Callaghan raised was roofing over the spectators. From his experience as being the honourary chair of Summerfest, held in late August, volunteers organizing these major events became discouraged when their festivals are rained out because there is no protection for the audience.

Ward 7 Coun. Russ Thompson said tourists are discouraged from visiting the city for Bell Park events when they also are rained out.

“If we are going to do something, like build an amphitheatre, then let's do it right,” Thompson said.

The estimate for the roofing over the spectators was $2.4 million, Catherine Matheson, general manager of community development, said. That could be be brought back to future councils in 2011 or beyond for consideration.

However, the necessary preliminary construction work, the footings, should be done now as part of the original construction, it was noted. That would cost about $175,000. Doing the work now would be much cheaper than trying to do that work later after the initial construction was finished.

Council passed a resolution calling for more seating and for funding the footings.

Callaghan said he felt the original $5 million for the redevelopment of the amphitheatre was too low and unrealistic and that if the project was done right it could be a gem for the city and northern Ontario.