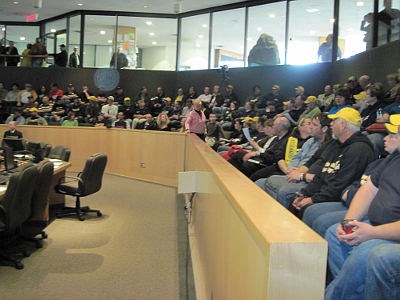 Striking Vale Inco workers, represented by United Steelworkers Local 6500, and supporters packed the city council gallery and upstairs foyer in support of Ward 3 Coun. Claude Berthiuame's motion to encourage Vale Inco to terminate its use of replacement workers during the current labour dispute. Photo by Bill Bradley.
Greater Sudbury's city council has unanimously passed a motion calling on the provincial government to support legislation banning replacement workers, as well as encouraging Vale Inco to return to the bargaining table.

The April 28 meeting of city council was attended by up to 200 striking Vale Inco employees represented by United Steelworkers Local 6500 and supporters. They filled council chambers' gallery and spilled over into the foyer, and interrupted the meeting several times with cheers and boos.

The motion was brought forward by Ward 3. Coun. Claude Berthiaume, who said Vale Inco has a "responsibility to show leadership and good faith, and to make every reasonable effort to end the strike."

The strike, which began July 13, 2009, is nearing 10 months. Around 3,000 workers employed in Greater Sudbury and Port Colborne, Ont. are on strike. Employees in Voisey's Bay Nfld. also went on strike a short time later.

Berthiaume and Ward 5 Coun. Ron Dupuis, who seconded Berthiaume's motion, argued Vale Inco were taking actions that had not been seen in decades.

"Not since 1944 has the company attempted to go into production (while on strike)," Berthiaume said. "This company brags day in and out that it is ramping up production."

"It affects not only those on strike, but the mining supply and service sector in the city," Berthiaume noted. "Many workers have been laid off there, or are on reduced hours. It affects our retailers."

Dupuis said he could understand what striking workers and their families are going through.

Not everyone was in agreement with Berthiaume's motion, however, citing neutrality concerns.

Ward 8 Coun. Ted Callaghan suggested an amendment to Berthiaume's motion, suggesting the clause petitioning the province to end the use of replacement workers be removed. The amendment, he said, would be similar to one passed by city council in 2000 when Falconbridge workers were on strike.

His suggestion was answered with boos from the gallery of Steelworkers.

When Callaghan's amendment went to vote, however, it was defeated by a narrow margin of one. Six councillors voted in favour of the amendment, while seven voted against it.

Janet Gasparini, who represented Ward 11, agreed with Callaghan's concerns the council was taking sides, though she said she had to vote in favour of Berthiaume's motion as a matter of conscience.

"This is also a social justice issue," she said.

The motion itself went to vote and received unanimous approval from the councillors.

The mayor's caution matched one made on the union's Strikeforce Facebook page earlier in the day by Berthiaume.