Locomotive engineers and conductors from CP Rail, part of Teamsters Canada Rail Conference Local 308 in Sudbury, have been on the picket line since May 23, and they have no intention of leaving until their requests for maintaining 10-hour shifts and
May 25, 2012 7:38 PM By: Sudbury.com Staff 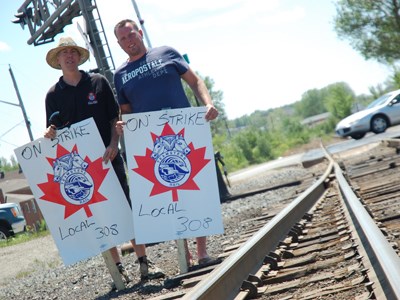 Locomotive engineers and conductors from CP Rail, part of Teamsters Canada Rail Conference Local 308 in Sudbury, have been on the picket line since May 23, and they have no intention of leaving until their requests for maintaining 10-hour shifts and leaving pensions alone are heard.

The company, on the other hand, would like to see union members work 12-hour shifts and decrease pensions by an average of 40 per cent.

“We aren't going to accept that — we can't,” Scott Graham, strike captain, said from the picket line May 25. “We've been bargaining, but there's just no give on the company's side.”

According to Graham, it's just not reasonable for them to move from their negotiations.

“What the company wants is longer work hours,” Graham said. “We label that as fatigue management. We have to work 10 hours now, and that's enough.”

He said safety will become an issue if this is mandated to workers — since “the company preaches safety and the union preaches safety,” it makes sense for workers to sign off at the 10-hour mark.

The other key issue they're facing is pensions.

Ryan Rushton, a conductor acting as strike master, said the average union member pays between $9,000 to $12,000 into their pension plan annually. To cut their pension to the same amount as someone who pays closer to $4,000 a year isn't fair, he said.

“Does that feel right? No,” he said. “We've showed this company we can work with them and work for them, and this is how we get repaid.”

Since the strike began, Graham said the company has been threatening layoffs in other parts of the operation.

“Apparently because of our strike, they've been laying off in different departments,” he said.

Graham believes this has been done to “paint a bad picture – we went on strike, and people are getting laid off,” when in all actuality, he said it would be an ideal time for workers to be on the tracks, making repairs and carrying out other tasks.

The economic impact of a prolonged work stoppage is such that federal Labour Minister Lisa Raitt has said she is ready to introduce back-to-work legislation as early as May 28.

Rushton said since the CP isn't an “essential service,” government has no place telling them to get back to work.