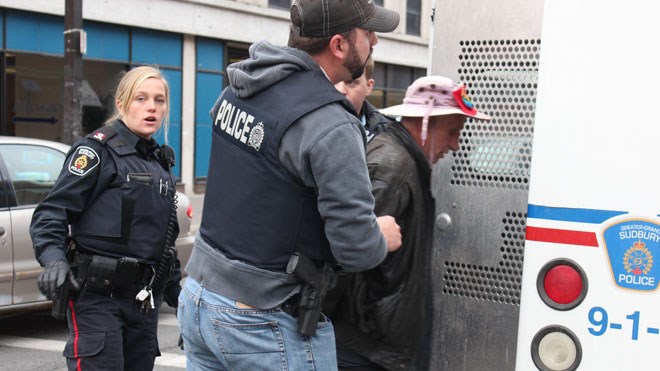 Eleven members of the group were arrested during the November 2012 sit-in staged to protest cuts to a social assistance benefit program called the Community Start-Up and Maintenance Benefit.

Justice of the Peace Diane Lafleur dropped the charges against all 11 defendants earlier this fall, ruling that Assistant Crown Attorney Peter Willis had failed to provide enough evidence through testimony to secure a conviction.

In the case of two of the defendants, it was because there was no testimony about their activities before, during and after their arrest.

Charges against the rest of the S-CAP 11, as the group has dubbed itself, were dropped because there wasn't adequate testimony about the jurisdiction in which the incident occurred.

He said he hadn't yet received his notice as of Nov. 25, although police had attempted to deliver it to his office.

The notices then go to provincial court to see if they have merit, according to a press release from S-CAP. If it is decided that there are grounds for an appeal, a new trial will be ordered in provincial court.

Northern Life attempted to contact Willis to learn the reasoning behind the appeal, but was told he's now working for the Crown's office in the Kenora district, and was referred to Minister of the Attorney General spokesperson Brendan Crawley.

“As these matters are currently within the appeal review period, it would be inappropriate to comment,” Crawley said, in a brief email statement.

With the appeal, Kinsman said the S-CAP 11 feels as if there's a campaign of “harassment and persecution” against them. He said they'd rather be spending their time fighting for the poor than worrying about legal matters.

“We've gone through one trial already, and we had to wait a year for that,” he said. “Here we have (the Crown), because they lost the case, trying to get it appealed so they can actually have a new trial.”

Kinsman said the group is also concerned about all of the public resources which have been devoted to this matter, including the police who arrested them in the first place, the trial and now the appeal.

“We also feel that there certainly should be clearer and better social priorities than going after anti-poverty activists, like actually putting some of the social energy and funding and resources into fighting poverty itself.”