Court of Appeal rules Crown can have a second opportunity to appeal city’s acquittal in death of Cecile Paquette
Apr 27, 2021 9:29 AM By: Arron Pickard 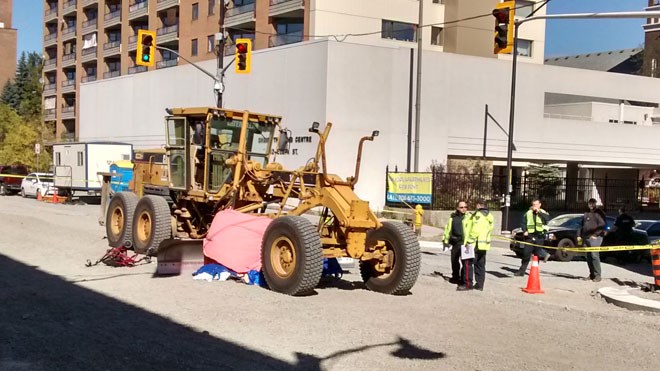 On Sept. 30, 2015, Sudbury woman Cecile Paquette died when she was run over by a grader operated by an employee of Interpaving Ltd. on an Elgin Street construction site. Interpaving pleaded guilty, while the City of Greater Sudbury was found not guilty. The Crown has been granted leave to appeal the city's acquittal. (File)

The City of Greater Sudbury is headed back to court three years after it was acquitted in 2018 of all charges in the death of Cecile Paquette.

Paquette, 58, was hit by a grader and killed while crossing Elgin Street in downtown Sudbury Sept. 30, 2015.

Greater Sudbury pleaded not guilty to seven charges from the Ministry of Labour, which attempted to prove the corporation was the constructor and the employer of the project, and therefore culpable in Paquette's death.

Ontario Court Justice Karen Lische absolved the city of responsibility in the death of Paquette in a 2018 ruling. Lische also found the city had a due diligence defence to the charges.

The Crown appealed the acquittal, but the appeal judge upheld Lishce’s ruling.

The Crown appealed the dismissal, stating the appeal judge erred in concluding that the city was not an employer under the Act. The city’s possible status as a constructor is not subject to appeal.

The Court of Appeal concluded the city was an employer within the meaning of the Act and, as a result, was liable for violations of the regulation found by the trial judge, unless it could establish a due diligence defence.

“The appeal is allowed and the decision is remitted … to hear the Crown’s appeal of the trial judge’s due diligence finding,” said the court of appeal.

The Crown is arguing the trial court’s test for due diligence — a matter not addressed by the appeal judge — was wrong in law. The Crown asserts the city was required to show it took all reasonable steps to ensure that specific safety violations were remedied, and that general acts directed at safety cannot satisfy the due diligence obligation.

“The city remains confident in our position on this matter and respects the ruling made by the court and outcome from Friday’s hearing,” said Shannon Dowling, city spokesperson, in an email. “We are not in a position to speak to legal matters and, therefore, cannot discuss further.”

The construction company, Interpaving Ltd., was fined $195,000 under the Occupational Health and Safety Act after being found guilty of failing to provide a signaller at the construction site.

A court date has not been provided.