Cummy Burton remembered for his sense of humour 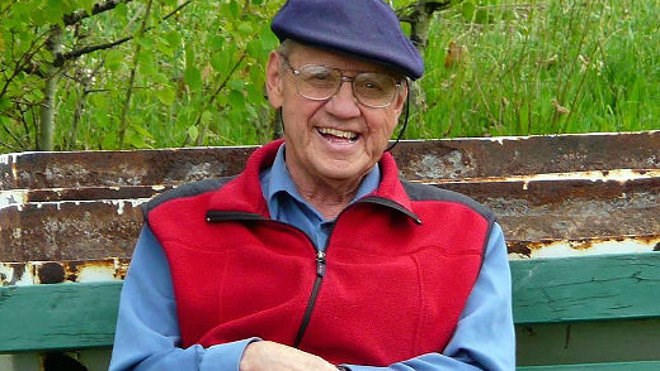 A service was held for Burton on Aug. 28.

After starring in the OHL, he enjoyed a brief NHL career that began in 1959 when he signed with the Detroit Red Wings.

“There he was, a rookie at 21, rooming with Gordie Howe, and playing with Alex Delvecchio and Ted Lindsay,” his obituary reads.

His career was derailed, however, by a bad knee operation, and he ended up with a few jobs – including selling cars and working for the railway – before becoming sports director with CKSO, and later for a brief stint with the local CBC.

“Cummy was the last person to wear Detroit’s No. 6 jersey,” his obit continues. “It had been retired to honour his cousin Larry Aurie, the team captain who led Detroit to two Stanley Cups in 1936 and 1937.”

“There had been a death threat on these Detroit superstars by a disgruntled Leaf’s fan and they wanted the rookie Burton to test the waters. Cummy refused.”

It was former broadcaster Bill Catalano who hired Burton in 1978 to work at the then fledgling CBC station in Sudbury.

"Every day, he had a great story to tell," Catalano said Friday.

He tells of one from 1973, when he and Burton were in Toronto for the NHL draft.

"The night after the first day of the draft, we wandered in to the Royal York Hotel and, lo and behold, who does Cummy run into but Gordie Howe," he said.

"Gordie is thrilled to see him. We go to the lounge and sit down. We order a drink, and ... I had very little to say, since I was in front of my boyhood hero — I let them talk as long as they wanted."

Burton roomed with Howe whenever he was called up from the AHL, Catalano said.

“He was kind of his babysitter,” he said, in an era when Howe was the best hockey player in the world.

"At one point, (Howe) turned to me and said, 'I'm going to tell you something, Cat, this guy is kind of different in his sense of humour."

Howe recalled one time when they were rooming together and the phone was ringing off the hook. A weary Burton looks at Howe and says, “How can you stand it? This is ridiculous. This phone rings every five minutes. How can anybody sleep with all this nonsense?'"

So Burton picks up the hotel phone, dials the front desk and deadpans, “No more calls for Burton."

Burton was inducted into Hockey Heritage North, which honours NHL players born in Northern Ontario, and he was also inducted into the House of Kin Sports Hall of Fame in 2012.

“Cummy loved people and they loved him back,” his obit continues. “He was funny, smart, honest and outrageous. He supported the Boy’s Home with Father Brian McKee and was a 'Flying Father' when he was needed to don the cassock. He was a wonderful friend.”

He was predeceased by his first wife, Gayle Sawdon, and his son Marty Burton (2004). He is survived by his wife of 49 years Suzie (Ebbs); his children Mike (Lisa McClellan), Christy (Craig Forrest), George and Cummy Jr. (Joanne Harris); and his grandchildren Madison, Dustin, Jacob, Cassidy and Tyler Burton and Kate Forrest.