Cycle trail from Sudbury to the Soo to open next summer 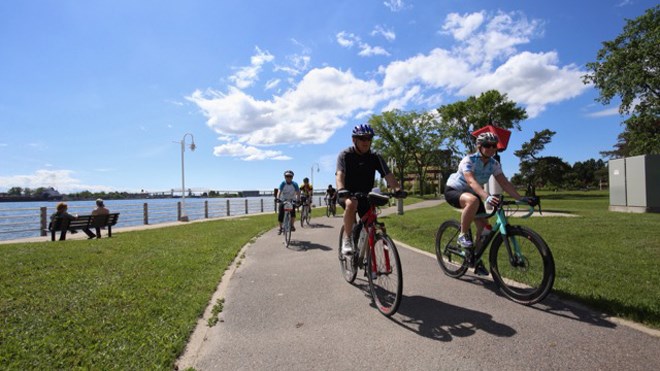 Waterfront Regeneration Trust has been hosting pilot rides of the province's first northern bike trail throughout the month of June, which is bike month across Ontario. The Lake Huron North Channel Trail is slated to open next summer. Supplied photo.

Cycling enthusiasts will have a brand new way to see Northern Ontario as early as Canada Day 2017.

Waterfront Regeneration Trust has been hosting pilot rides of the province's first northern bike trail throughout the month of June, which is bike month across Ontario.

The Lake Huron North Channel Trail will be the first fully signed and maintained northern cycling trail of its size, stretching 380 km from Sault Ste. Marie to Sudbury, with 18 stops along the way.

The expansion is made possible by a partnership between Waterfront Regeneration Trust, Trans-Canada Trail and Ontario Trillium Foundation.

“The plan for this trail is to connect, protect and celebrate,” said Marlaine Koehler, executive director, Waterfront Regeneration Trust.

“It allows people to see communities and towns in different ways while also keeping cyclists off Highway 17.

Waterfront Regeneration Trust is the non-profit organization behind the Waterfron Trail – a 1,600 km bicycle trail that runs along the shores of Lake Ontario, Lake Erie, Lake St. Clair and the Niagara, Detroit and St. Lawrence Rivers.

Every year the Trust hosts the Great Waterfront Trail Adventure, a weeklong bicycle discovery trip across the shores of the Great Lakes.

By July 2017, Northern Ontario's section of the trail will be open and allow northern cyclists to see the region in ways that weren't previously available.

“Right now it's kind of a death-defying adventure all along Highway 17; what we're able to do with this initiative is take a 380 km route along Highway 17 to only 45 km on 17,” said Koehler.

The Ministry of Transportation has also committed $8 million to paving the shoulders of those 45 km of Highway 17 in order to enhance rideability and safety along the highway.

“It's way safer, it's way more scenic and it takes people directly into the towns that are linked,” Koehler said.

“You'll go into Massey, you see Iron Bridge, and you see what's really attractive about those towns, the beautiful waterfronts that have been created. Even in Sudbury, people take Highway 17 and the bypass and they have no idea how beautiful it is and what's been done around Ramsey Lake or the funky cultural and animated lifestyle in the downtown core around Elgin Street, and what we want to do is rehabilitate peoples' experience of Northern Ontario by taking them off (Highway) 17 and into those towns again.”

“It's neat for people to go through some very lovely First Nation communities and see what they're like and stop in their arts and crafts shops that dot the way,” said Koehler.

Cycle tourism is a relative unknown at the moment according to Koehler, but is one that has enormous potential. Quebec is perhaps the largest cycle tourism centre in the country with 4.2 million cyclists having an economic impact of $1.2 billion last year.

“When we're thinking about what tourism market we want to attract into our northern communities, that market is one of the key ones that we want to lure into Ontario,” said Koehler.

“The other would be the U.S. market and their spending on cycle tourism is somewhere close to $47 billion annually. People don't think cycle tournism is a meaningful part of the tourism economy but they're wrong. They (cyclists) don't have trailers or cars to carry everything so they buy along the way.”