Deadline nearing for Sudbury horse-racing deal to save season

The backlash that followed the announcement prompted Premier Kathleen Wynne to change course shortly after she became Liberal leader in 2013. Transitional funding in 2013 allowed a shorter racing season.
Apr 27, 2014 4:58 PM By: Darren MacDonald 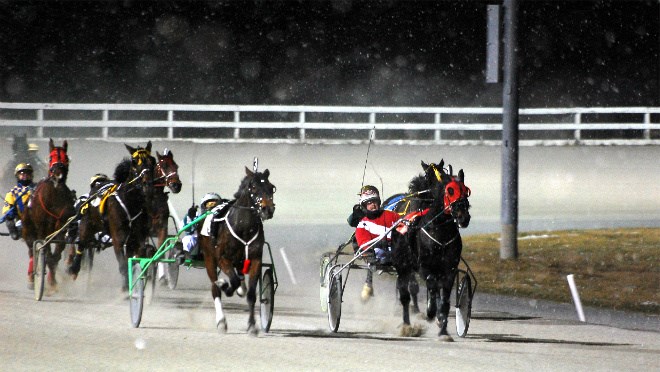 A weekend meeting at Sudbury Downs could determine whether there will be racing at the racetrack this summer. File photo.
The backlash that followed the announcement prompted Premier Kathleen Wynne to change course shortly after she became Liberal leader in 2013.

Transitional funding in 2013 allowed a shorter racing season. And the funding became a five-year, $500-million deal starting this season. But track and horse owners have been pushing to be included long-term to allow them to plan for the future.

OLG spokesperson Tony Bitonti said Friday's announcement is really an update on steps being taken to integrate racing into the OLG's plans. Operators who bid for the right to operate gaming facilities in the gaming zones will now be asked to demonstrate they have knowledge or interest in horse racing.

It's a complex process, Bitonti said, involving not only provincial bodies, but the mostly federal laws that govern racing. But the plan is to help market the racetracks, as well as to create lotteries or some form of a separate revenue stream that would be dedicated to supporting the industry.

“There's a number of options out there for us,” he said. “We just have to make sure they fit in with the provincial laws we deal with, and don't supersede federal laws.

“We're exploring these products – horse-themed lottery/gaming products, we haven't decided which way we're going to go. But revenue generated by these products would go into a plan to sustain the horse-racing industry.”

While racetracks in southern Ontario have already signed deals for 2014 and beyond, Sudbury Downs is still negotiating with the province. Downs Director Andrew MacIsaac said he hoped there would be a deal soon, so a planned 32-date racing season can begin as scheduled on May 24.

“We're still discussing with government the future of racing in Northern Ontario,” MacIsaac said. “I'm very hopeful – but not optimistic.”

While May 24 is less than a month away, he said they are not yet at the drop dead date when the season would have to be delayed – although he declined to say when a deal was needed.

“There's some flexibility,” he said. “It depends on a number of different things.”
MacIsaac also declined to say what issues are preventing an agreement.

But the president of the Northern Horsemen Association said it's not hard to guess.

“We don't know what it is – but it's probably money,” Bob Bodkin said.
Bodkin said he and other drivers and owners were at a meeting with the Downs on April 19, when they were asked how many horses would be available to race this year if there was a season. The possibility of offering free stabling at the track was also discussed, Bodkin said.

“But it's a Field of Dreams type thing,” he said. “People will come (if they can) stable for free. But I can't tell you I'm going to come up here with 20 horses before I know that it's open. If you tell me it's open, then I'm coming.

“And that's what we told them – tell us the backstretch is open, tell us we have X number of days to race, and then sit back and count the applications.”

Two keys for horse owners, he said, was not having to pay rent for stabling the horses, and having a longer racing season. The 20 dates held last year made it far too difficult for owners to make money, Bodkin added.

Current rules dictate a track must be open one month before racing begins, so horses have enough time to train. But Bodkin said there are enough horses that would come to Sudbury that have been racing this year.

“There may be horses around here that need the month to get ready, but I'm thinking any of the horses ready to race May 24 have already been racing this winter,” he said.

“I sold my horses in the fall, but there's a sale coming up May 12. If there's a deal in place, and if everything's a go, I'll go there and bring three or four back. And I know other guys who will do the same. And those are horses that have been racing. Last year, we bought six – we just bought them and put them right into a race.”

Bodkin said it's vital there's a racing season this year for the Downs and the local horse-racing industry to survive. The industry was already hit hard in the last two years, and could collapse if a summer goes by without racing.

With the OLG now talking about separate revenue streams for the industry, it's possible the industry will survive, Bodkin said. But Bitonti said only tracks that sign on to the plan are eligible.

“For Sudbury Downs, that does not apply right now, because they do not have a deal,” he said. “If they get a deal, and they become part of this horse-racing partnership plan, then this ... will take effect for Sudbury.”