Despite urgency of the name, council votes to discuss Project NOW later

Council runs out the clock on debate on whether or not they want to hear from team proposing a  project to reno and modernize Sudbury Arena they claim would be $40 million cheaper than the KED
Sep 9, 2020 1:05 PM By: Matt Durnan 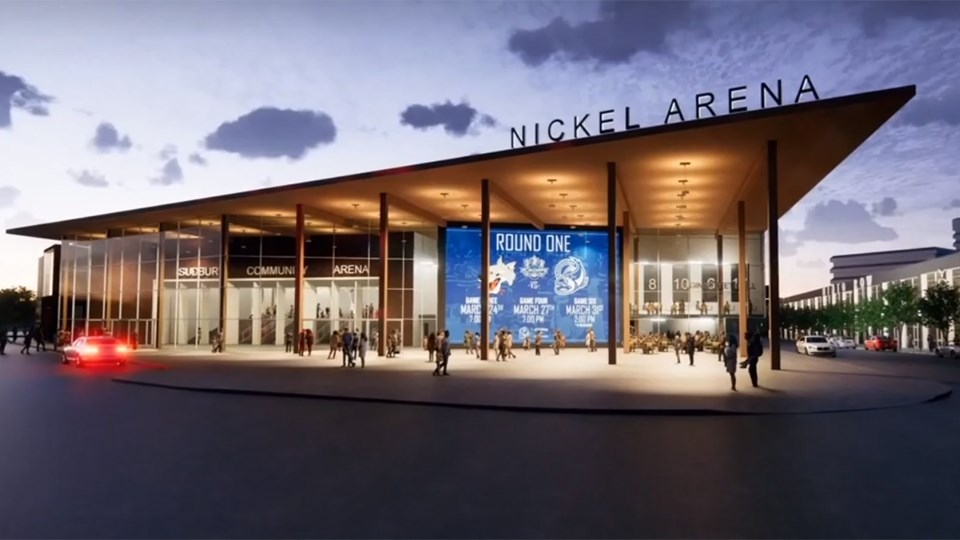 Greater Sudbury Ward 4 Coun. Geoff McCausland doesn't believe that a proposed renovation to the downtown Sudbury Arena would save the city the $40 million that local architecture firm 3rdLineStudio says it would, but he does believe council should at least take a look at the idea.

McCausland and Ward 1 Coun. Mark Signoretti tabled a members' motion during Tuesday night's city council meeting, requesting that staff take a closer look at the proposal — dubbed Project NOW — that was released publicly over the summer.

The proposed plan promises renovating the Sudbury Arena would save $40 million compared to building a new arena. The plan includes an overhaul of the existing downtown arena that would include expanding and upgrading the public entryways, creating a new concourse, new loading access and event support spaces, as well as adding 450 indoor parking spaces adjacent to the arena.

With the motion on the table, council debated back and forth, with some councillors arguing that this was a change of direction that stepped on the toes of council's 2017 decision to move forward with the Kingsway Entertainment District.

"I absolutely am not talking about a reconsideration, a redirection or a change of course in this effort," said McCausland.

“That being said I believe it is critical that this council doesn't allow a myth to persist in the community that we had a chance to save $40 million and we didn't even give that the time of day."

McCausland asked for a deferral of the motion to the Oct. 6 meeting before debate on the motion even got underway, indicating that he would like the Project NOW team to make a presentation at the meeting so that councillors can pose their own questions before deciding whether it's worth having staff take a closer look at the proposal.

The request was met with opposition from Ward 5 Coun. Robert Kirwan, a strong proponent of the KED project, who said this could open the door to more groups bringing arena proposals forward.

"I have no trouble with a deferral, but I have a problem with the deferral so that staff can bring back this company to make a presentation, when we're not extending the invitation to any other company that has a presentation to make, because I know this isn't the only company that had an alternative that involved the renovation," said Kirwan.

Mayor Brian Bigger asked whether staff had received any type of request from the Project NOW group to review their proposal and how it fit into the city's process for unsolicited proposals.

"Staff have not received any information about this plan so I don't know whether it constitutes a proposal. We certainly haven't issued any market solicitation for such things," said the city's CAO, Ed Archer.

"This was a subject, as council is aware, that was reviewed over several years, the status of the existing arena was decided. We have not since then taken any efforts to pursue any alternatives to the current approved plan which is the Kingsway development project."

Signoretti backed McCausland's motion to defer the decision and have the Project NOW team make a presentation.

"We debated tonight and I've listened to a lot of arguments about savings and looking at saving tax dollars on road construction and other projects. This is another example of a potential savings that we'd be remiss not to allow them to come forward and do a presentation when there is potential for up to $40 million in savings," said Signoretti.

Kirwan remained firm in his opposition to having a community group come forward with a presentation on the downtown arena. He said the KED decision was already made by council and he’s concerned if they allow a presentation on the Project Now idea, they would be rolling back the clock and opening the door for more groups to make more presentations on a decision council made three years ago.

"To use a basketball analogy, this is a continuation shot," said Kirwan.

Ward 10 Coun. Fern Cormier was in favour of having the Project NOW team bring a presentation forward to council, noting that the motion was very clear in its direction and it was in council's best interest to ask questions of the group that claimed its plan could save the city $40 million.

"I don't think it's irresponsible of us to respond to an assertion that there could be that many millions of dollars of savings on the line for this, I think it's perfectly reasonable for us to look into it," said Cormier.

"I also think it's reasonable that all of us have an opportunity to see the presentation in full and put questions to those who are advocating for it in the community, and I don't see it as any more or less than that. I don't see it as a reconsideration. It is very clear in my mind, as has been stated by staff and others here tonight, that direction was given to staff. They're following that direction, that was the will of council, they're going to keep following that direction unless we tell them otherwise and that's not what this motion is doing at this stage."

Any further discussion on whether or not council will hear a presentation from the Project NOW team will have to wait, as council voted against proceeding past 9 p.m. on Tuesday night, shutting down the debate for the evening before any decision on the members' motion was reached.