For the past 13 years, Richard Migneault has had the same personal support worker attend to his daily care in his New Sudbury home. “As far as home care goes, it's unheard of to be with one client every day,” said his caregiver, Louise Romo.
Jan 30, 2014 9:49 PM By: Jonathan Migneault 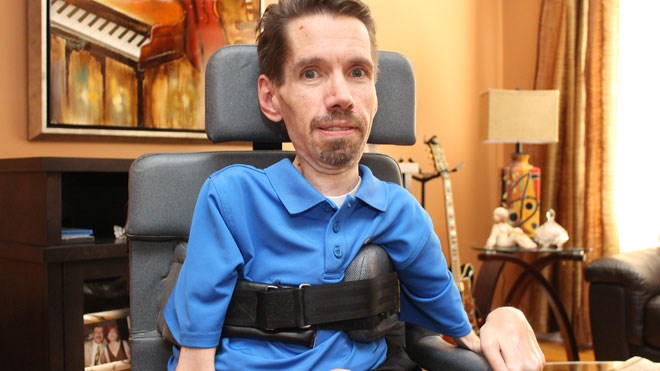 “As far as home care goes, it's unheard of to be with one client every day,” said his caregiver, Louise Romo. “His routine is my routine, basically.”

Romo is an exception in a field where most personal support workers who provide home-care work for for-profit agencies, such as Red Cross Care Partners and Bayshore Healthcare Ltd.

PSWs who work for private service providers have a number of clients they can only see for a limited time each week.

In contrast, Romo sees Migneault for six hours a day, five days a week. He also has a second PSW who attends to his needs on weekends.

Migneault was born with spinal muscular atrophy, a degenerative condition that causes his muscles to progressively waste away.

“I have very limited mobility and strength,” Migneault told Northern Life. “I need assistance with pretty much everything.”

He is able to have consistent care from his PSWs at home because he self-manages his care through the province's Direct Funding Program.

The program grants Migneault funds to hire, manage and pay his own PSWs for 182.5 hours per month – the maximum allowable – at a rate of $16.35 per hour, which is on par with many of the private agencies.

Migneault, a longtime advocate for the rights of persons with disabilities, and independent living, was able to participate in the program when it first started in 1995.

As a veteran with the program, he has become one of its biggest advocates, and often sits on the three-member board that interviews new potential self-managers.

“If you look at what's out there now, this program offers more hours than anything else,” Migneault said. “It gives you a lot of flexibility, which a lot of the current services don't do.”

Lauren Vary, the widow of John Vary, a former mining engineer with Falconbridge who died of amyotrophic lateral sclerosis (ALS) in January 2013, told Northern Life her husband received inconsistent care from an unnamed PSW agency during his final months.

In two and a half months, 22 PSWs visited their home. Vary said this “revolving door” provided no consistency. Each time a new PSW came by, she had to re-explain the layout of their home and John's needs.

But Migneault said the Direct Funding Program has given him consistent care, and service from a PSW who has been with him for more than a decade.

Because the provincial funding is tied directly to the person with the need for the program, only they can direct the care. A friend or family member cannot take on that responsibility through power of attorney.

“There are more than 700 people doing it across the province,” said Leisa DeBono, who manages the Direct Funding Program out of Toronto. “It can't be that hard.”

Thanks to a recent funding increase from the Ministry of Health and Long-Term Care, the program is expected to help 1,000 Ontarians manage their own home care by 2016.

The province has committed to increase the program's funding by $15 million over three years, into 2016.

Rob DiMeglio, executive director of Independent Living Sudbury Manitoulin, said 23 people in Sudubury use the Direct Funding Program, and another 20 people are on a waiting list for the program.

Applicants can wait more than two years for an interview to participate in the program, but that has been reduced from a four-year wait time.