Says it's tough to find examples of successful arenas that have built outside of city core
0
Jun 19, 2017 1:21 PM By: Darren MacDonald 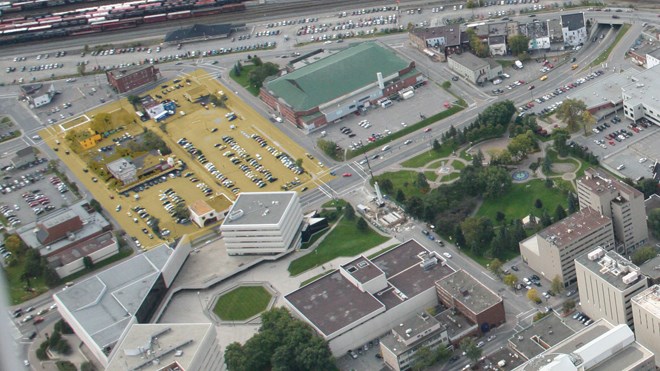 The location of a possible downtown event centre would be in the Minto/Shaughnessy block (marked in yellow), should council vote for a downtown location. (File)

While both are viable options, city staff is recommending a new arena/events centre be built downtown rather than on The Kingsway.

In an interview Monday morning (click here to watch the interview), city CAO head Ed Archer said there has been “an intense amount of work” since staff received direction in March from council to evaluate sites and make a recommendation where the $80 million to $100 million centre should be located.

In addition to city staff, consultant Ron Bidulka of PriceWaterhouseCoopers and other consultants hired do technical work – such as traffic and soil studies, and economic impacts – came up with the recommendations.

Ron Henderson, the city's director of citizen services, said there were eight criteria used for each site evaluation, with three or four questions tied to each criteria. The results are their best recommendations, Henderson said.

"There's some subjectivity involved, I will admit that right up front,” he said. “At the end of the day, it really came down to professional judgement and experience from a whole host of senior city staff."

While The Kingsway site came highest in two of the three criteria council picked as most important – cost and parking – it ranked lower in the third category, ease of development.

"The Kingsway site needs a rezoning, the downtown site does not. The Kingsway would require some kind of an environmental assessment. Even though we don't build on it too much, it is next to the landfill. There's some minor issues to deal with that. Where the downtown is a little bit more of a cleaner site in terms of environmental issues."

The downtown arena would be located in the Minto/Shaughnessy streets block. Existing businesses in the area have already agreed to a sale price, Henderson said.

"I can tell you that, for all the affected sites we were successful in negotiating a purchase agreement for all the businesses and land that we need to begin construction," he said. "We didn't want our council to make a decision, then find out that the landowner adds a zero to his asking price. So we wanted to lock in prices and so forth."

One issue that stands out downtown is parking. Archer said that's more of a perception issue.

"From a technical perspective, in regard to the number of spaces you need, there is enough parking downtown,” he said. “The challenge, I think, is the perception, and perhaps the reality for some, that it's not conveniently located."

While the city wouldn't be involved, Archer said there has been interest from the private sector in building a parking structure.

"So we anticipate that might develop further," he said. “The challenge with the downtown site for council's consideration is whether that's sufficient from a convenience perspective and experience perspective."

The report says it could take a year to get the rezoning for The Kingsway site, a process that could delay the project.

Ian Wood, the city's director of economic development, said even if the rezoning happened much quicker, there could be appeals that would delay the project further.

"There's also the potential for appeal in a rezoning process," Wood said. "We're trying to put out realistic numbers."

Archer said the new arena would include retail on the ground floor and a 5,800-seat rink. What would happen with the former arena would be something that council would decide later.

When asked about potential cost overruns when building downtown – both LU's School of Architecture and The Beer Store encountered significant delays and cost increases because of wet soil – he said that was part of the evaluation.

"Soil conditions downtown were considered and we used technical experts to give us opinions on that,”he said. “The experience, particularly of the School of Architecture, informed our estimates both of time and costs associated with the development like this."

Henderson said they talked to officials at the Meridian Centre in St. Catharines — it has similar soil conditions to Sudbury — and based their estimates on their experience.

"We feel our estimates are reasonable for council to make a decision about where they think the location should be," Archer added.

There has been talk that downtown was the preferred site all along, but Archer said he's satisfied this was a fair process and the recommendation is what they believe will offer the biggest benefit to the city.

"We are looking at what is good for the community as a whole (and) a strong community has a strong downtown,” he said.

"But we didn't just look at what is good for the downtown. We looked at what's good for the community, and with respect to the sites we evaluated, we evaluated the potential economic impacts based on those sites.

"It's important to stress that while the downtown site is the highest ranked site ... The Kingsway site is a viable choice, as well. And our report clearly says that."

While there are already businesses downtown that would benefit from a new events centre, he said the benefits of building on The Kingsway are less certain.

"You anticipate development to occur, and it may be reasonable to anticipate, but it hasn't happened yet," Archer said. "With the downtown site, you have complimentary businesses in place. You have infrastructure ready for use. From that point of view, there is greater risk associated with The Kingsway site."

And Henderson said they have tried to learn from the experience of other cities who have built similar projects over the last 20 years.

"It's pretty fair to say, and safe to say, that most cities have built their events centres downtown and have seen immediate benefit from that," he said.

"Unfortunately, it was difficult to find good examples of cities that have built on a greenfield site that were happy with it. I think of Ottawa and Medicine Hat and Windsor.

"That's not to say it can't happen here, but it was very difficult to find evidence of a city that built on a greenfield site and it worked out for them in terms of the economic impact they were hoping would occur."