Hanmer resident Denis Lemieux has wanted to be an architect since he was little. “I've been sketching houses and drafting and all that since I was seven,” he said. “I've always had an interest in architecture.
Sep 5, 2013 2:50 PM By: Heidi Ulrichsen 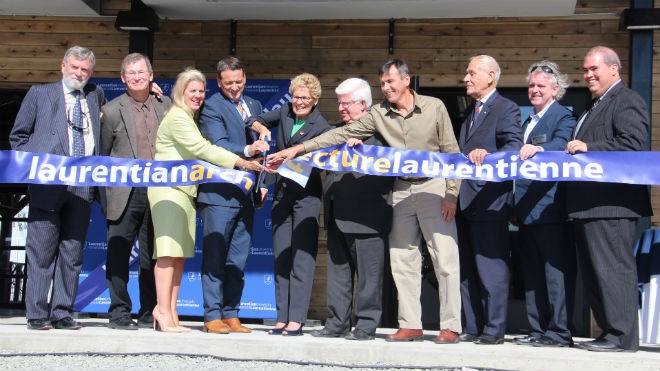 “I've been sketching houses and drafting and all that since I was seven,” he said. “I've always had an interest in architecture.”

No wonder he was so excited to attend the grand opening of the Laurentian University School of Architecture on Sept. 4, as one of 70 members of the school's charter class, no less.

Lemieux, who graduated from École secondaire catholique l'Horizon last June, said he doesn't really have any concerns about attending a brand-new, unseasoned architecture school – the first to open in Canada in more than 40 years.

“I'm going to be the first picture on the wall when other students look at it down the road,” he said. “I'm happy to be actually the first class in this school. It's going to be a pretty surreal experience.”

About 200 people, including such dignitaries as Premier Kathleen Wynne and FedNor and Science and Technology Minister Greg Rickford, gathered at the architecture school's downtown campus for the grand opening.

For the next few years, the architecture students will be attending classes in the former farmer's market building on Elgin Street, while faculty will have offices in the old Telegraph Building next door.

Both buildings have been renovated over the past year. By September 2015, there will also be an entirely new building for the architecture school constructed next to the railway tracks. All in all, the renovations and construction will cost roughly $20 million.

Laurentian University president Dominic Giroux said the new downtown campus is a return to the university's roots, as the institution started in the downtown 53 years ago.

He thanked everyone involved in getting the architecture school off the ground, from the three levels of government, which between them have contributed $41 million, to the committee which pushed for the school's creation.

Giroux announced Sudbury architect Blaine Nicholls, who was instrumental in leading the architecture school steering committee, will receive an honourary doctorate from Laurentian at an upcoming convocation ceremony.

“Thanks to all of you, downtown Sudbury and Laurentian University will be an address known for excellence and innovation in architecture education,” Giroux said.

Laurentian University board of governors chair and Northern Life president Michael Atkins said the architecture school “was no slam dunk” among university leaders in the beginning.

“This project would not have happened without a brilliant and determined community campaign to make its importance fully understood,” he said.

Having “a municipality that put its money where its mouth was,” provincial and federal support and a new university president “who saw is importance” also made sure the project came into fruition, he said.

Terrance Galvin, the architecture school's founding director, said the grand opening is a “proud day for us all.”

“I applaud and thank everyone for their generosity of spirit, for remaining committed to this collective vision, and looking forward to our moving forward and building together as the school starts today.”

Wynne began her remarks by noting Fred Rounthwaite, the father of her partner, Jane Rounthwaite, was one of the architects who designed Laurentian's campus.

“So, it's a small number of degrees of separation,” she said.

She said the opening of the architecture school is a “proud step” in Ontario's history and an “important milestone” in the North's development.

Frank Lloyd Wright, the iconic American architect, once said without an architecture of its own, civilization has no soul, Wynne said.

She told the students they will be part of the soul of Ontario's civilization, and can't wait to see what they'll help to create.

“You will contribute to the architecture of the North,” Wynne said. “We are so proud to have given you our support.”

Sudbury MPP Rick Bartolucci said wanted to thank the community for its advocacy regarding the architecture school. “This has been what I would suggest is a labour of love,” he said.

He said he's “very proud” of the $26 million his government put into the project.

Bartolucci also said he wanted to “warmly welcome” the new architecture students. “You're blazing the trail for future students and future teachers of architecture,” she said. “I wish you well on your journey. Enjoy your trailblazing.”

The world is paying attention to Northern Ontario for its work in areas such as technology and health care, and now architecture, Rickford said, adding that the federal government contributed $5 million to the school.

“The creation of the Laurentian University School of Architecture speaks volumes about Sudbury's resolve to grow and diversify as a community,” he said.

The architecture school — located at the intersection of Elm and Elgin Streets — is located in a historic part of Sudbury's downtown, Rickford said.

Mayor Marianne Matichuk said for her, the architecture school is a “dream project.”

She said city council contributed $10 million to the school and had to make the difficult decision to sell the farmer's market property to Laurentian to ensure the campus was located downtown, “where it belongs.”

“I want to thank my fellow councillors for their resolve,” Matichuk said.