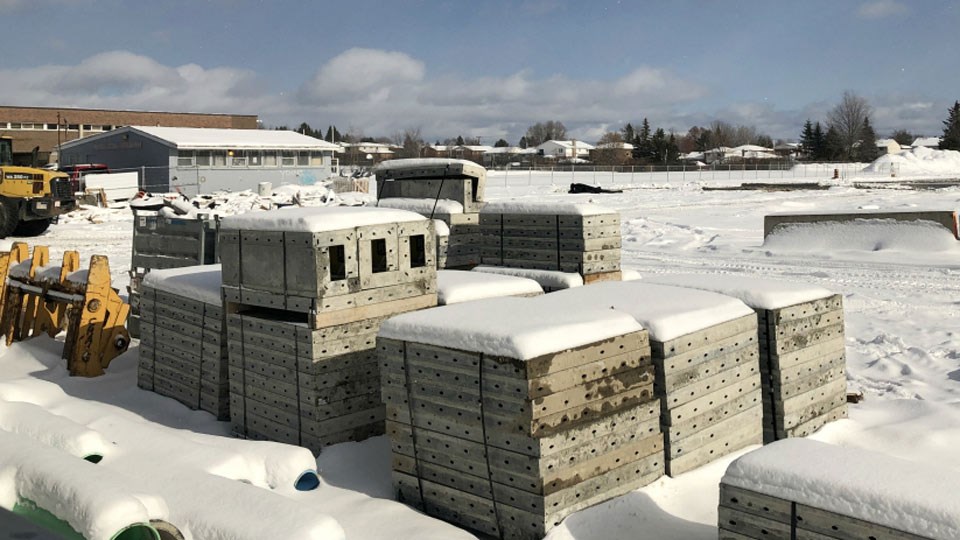 The sports dome being built at Lasalle Secondary School by the Rainbow Public School Board, seen here on Nov. 15, is expected to open around the middle of February. (Darren MacDonald/Sudbury.com)

In the planning stages for more than seven years, construction of a domed sports facility in honour of Fabio Belli is going well, but the early onset of winter means it won't be open as soon as officials had hoped.

The $4.1 million dome is being built and will be owned by the Rainbow District School Board. The driver behind the project, however, is the Fabio Belli Foundation, which will have use of the structure outside of school hours.

Belli, a councillor for Ward 8, passed away in April 2014. A huge soccer fan, he had been working to get a dome built in the city since 2012.

His family and friends took up the cause after his death, creating a foundation dedicated to fulfilling his dream. After many false starts, construction began this summer, with hopes of opening as early as December.

But Dino Moretta, a spokesperson for the foundation, said they had been shooting to open in January, but weather-related delays means that will likely be pushed back to mid-February.

“The fact that the snow came a little bit early, and we were expecting it to go away,” Moretta said, about the delay.

But the cold and snow remained, slowing work at the job site. The school board has told the foundation that, while there are no other major problems, the weather means crews won't be able to work as fast as they had hoped.

“It will open this winter,” Moretta said. “Originally it was Jan. 6, and until the weather, we were pretty much on schedule.

“We're so excited. It's been a long time coming. I know some of the user groups are a little bit disappointed, but everyone is doing their best … That's what we're telling our user groups, because they have to plan accordingly for their leagues.”

Once complete, the dome will be a smaller and less expensive version of the facility that was announced in April 2018. The then Liberal provincial government announced it would provide $4 million for the project, and Greater Sudbury was asked to provide $2.2 million for road upgrades and $750,000 for a new field house, with the Rainbow board providing $1.1 million to pay for the artificial turf.

But when the Liberals were booted from office last June, the Foundation learned the incoming Progressive Conservative government cancelled the $4 million. Greater Sudbury also withdrew funding.

The project went ahead with a smaller pricetag, and the school board agreed to provide $2 million to make the dome happen.

A second dome, worth $3.3 million, was supposed to be built last spring on the Kathleen Street side of Sacre Coeur school, but no updates have been provided on that project since 2018.