“That was quite a sermon,” said Conroy, a local lawyer and Huntington's former chancellor. “I'll never forget it. It shook me up. That was more than 50 years ago. I remember as though it was yesterday.” The inaugural Dr. Edward J.
Jun 2, 2015 8:27 PM By: Heidi Ulrichsen 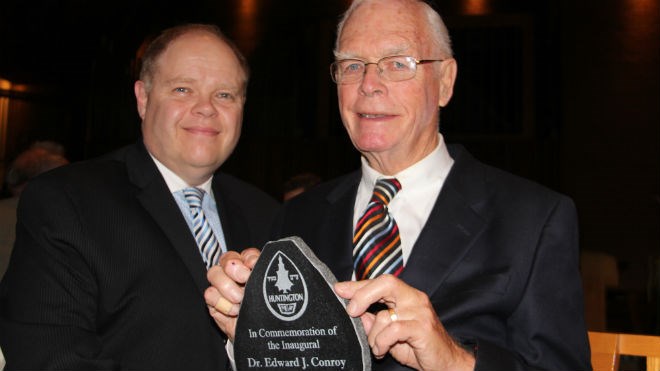 Huntington University president Kevin McCormick (left) is seen here with Edward Conroy May 28. The university has named a yearly lecture series and community awards program in Conroy's honour. Photo by Heidi Ulrichsen.
“That was quite a sermon,” said Conroy, a local lawyer and Huntington's former chancellor. “I'll never forget it. It shook me up. That was more than 50 years ago. I remember as though it was yesterday.”

Huntington board member Scott Darling was also presented with an Award of Merit for his efforts.

“I'm thrilled out of my mind,” Conroy said. “I think the idea of having guest speakers is good, and we have the commissioner of the RCMP. Secondly, I think the idea of awarding people in the community who do good things is great.”

Huntington president Kevin McCormick said the university decided to create the event — which will take place yearly — in Conroy's honour because of everything he's done for the Greater Sudbury community.

Conroy is a partner in the firm of Conroy Trebb Scott Hurtubise LLP, and is past-president of the Sudbury Law Association.

He served as Huntington's third chancellor for eight years, and can be found at most fundraising events in the city.

“Ted's a truly inspirational community leader, and I always say, somebody I'd like to grow up to be like,” said McCormick.

“I think Ted is an amazing person — a community leader, a community builder, and someone who is dedicated to ensuring that our communities are safe, secure, and everybody is treated equally.”