When Miranda and Derek Harpell travel, they like to spend at least some of their vacation volunteering with local organizations. As animal lovers, they usually gravitate towards causes which benefit animals.
0
Dec 31, 2013 7:54 PM By: Heidi Ulrichsen 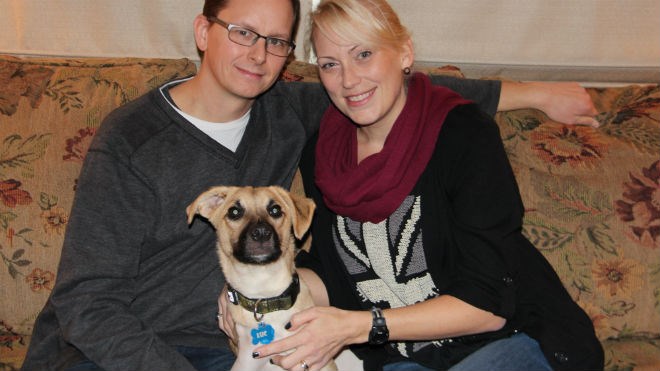 Lucas received severe injuries to three of his four limbs in Jamaica, where he was born. Derek and Miranda Harpell have brought him to Canada, and he's now receiving operations at the Espanola Animal Hospital to repair his limbs. Photo by Heidi Ulrichsen.

When Miranda and Derek Harpell travel, they like to spend at least some of their vacation volunteering with local organizations. As animal lovers, they usually gravitate towards causes which benefit animals.

So when the Toronto couple visited Montego Bay, Jamaica for a relative's wedding in mid-November, they phoned Tammy Browne, who runs Montego Bay animal rescue, and she invited them to help out at the shelter for a few days.

That's where they met Lucas, a sweet-natured puppy who had suffered massive injuries to three of his four limbs, and was hobbling around the shelter.

Nobody knows just what happened to Lucas, who is now about eight months old, but from the nature of his injuries, it's suspected he was either thrown from a car or a building.

“I was patting him, and he was just looking up and me like 'Take me home,'” Derek said.

They asked Tammy about the dog's prospects, and learned that while she was willing to keep him at the shelter for the rest of his life, he was considered “virtually unadoptable” in Jamaica because of his injuries.

The Harpells returned home to Canada and their own two dogs, but couldn't get Lucas out of their minds.

They started calling veterinarians to see how much it would cost to fix his injuries, should they bring the puppy here. Their own vet gave them a quote of about $12,000.

Then Miranda, who is originally from Sudbury, was told by a relative to phone Dr. P.J. Rocheleau of Espanola Animal Hospital, who has an interest in orthopedic surgery and working with shelter animals.

After examining x-rays taken of the dog in Jamaica, Rocheleau told them he thought he could do the work for about half of the original quote.

While the Harpells had planned to do some fundraising before they brought Lucas to Canada, Rocheleau told them the surgeries were urgent.

“I said, basically, 'You need to get the dog here as quickly as possible. He's still growing, the fractures are still healing, and the window of opportunity to do something about this is closing,'” Rocheleau said.

With a lot of work by both the Harpells and Browne back in Jamaica, Lucas arrived at Pearson International Airport via an Air Canada flight Dec. 5.

Lucas' first surgery, which took place Dec. 24, involved breaking away the callus that had formed after his back left femur broke, and pinning the bone — which had been severely displaced — back together.

Some of the bone callus had actually grown into the knee joint itself, so Rocheleau had to break it away so the knee could move properly again. The dog is already walking well on the leg.

The second surgery, conducted Dec. 28, involved repairing Lucas' front right leg, as the joint's growth was stunted because the growth plates were shattered.

Because Rocheleau couldn't lengthen the limb as much as he'd hoped for fear of snapping the tendons, he'll operate again later this week to install a device which will gradually make changes to the leg.

Another two surgeries are planned for mid-January for Lucas' back right leg to fix yet more improperly healed fractures to the femur and tibia.

“This is by far the most complicated orthopedic mess I've ever seen in my life,” Rocheleau said.

Still, the veterinarian said he thinks in a year's time — given some intensive physiotherapy — Lucas will be running and playing like a typical dog, although he'll probably always have some arthritis in his limbs.

He said he decided to help out partly as a technical challenge, but also because he has an interest in helping out shelter animals.

Veterinarians, who are educated partly thanks to the public dime, have a responsibility to give back to society however they can, Rocheleau said.

The couple have been raising funds to help defray the costs of the surgeries, and so far they've scraped together $2,775. They say they'd be happy if they raised another $1,000.

All the expense is worth it, though, for Lucas, Miranda said.

“He's just so sweet,” she said. “I don't think I've ever met a dog I've known where in such a short amount of time, he feels like we've had him for years. He's bonded with us so quickly and is so adaptable to his environment.”

Province defers $15M in Northern Ontario land tax payments for 90 Days
Apr 7, 2020 9:00 PM
Comments
We welcome your feedback and encourage you to share your thoughts on this story. We ask that you be respectful of others and their points of view, refrain from personal attacks and stay on topic. To learn about our commenting policies and how we moderate, please read our Community Guidelines.