Evolution can be bad for your health: researchers

We are approaching a post-antibiotic world that could severely impact the ways we deal with simple infections. That was just one of the conclusions at Science North's Science Café event at the Laughing Buddha restaurant Feb. 10.
Feb 12, 2015 4:55 PM By: Jonathan Migneault 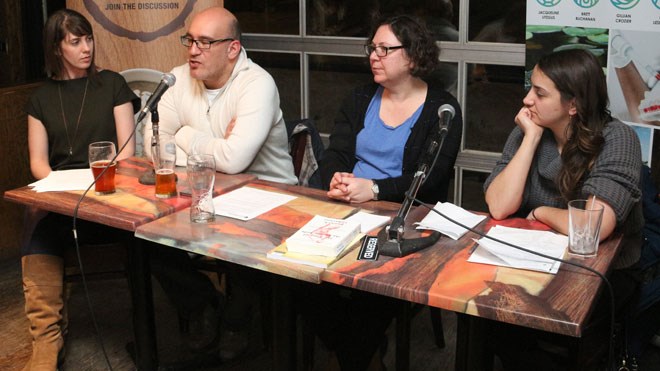 Science North gathered a number of researchers in biology and anthropology to discuss evolutionary medicine at the Laughing Buddha restaurant Feb. 10. From left, moderator Dana Murchison, a staff scientist with Science North; Laurentian University biology professor Albrecht Schulte-Hostedde; Tamara Varney, an associate professor at Lakehead University's department of anthropology; and Nicole Mideo, an assistant professor at the University of Toronto's department of ecology and evolutionary biology. Photo by Jonathan Migneault.

We are approaching a post-antibiotic world that could severely impact the ways we deal with simple infections.

That was just one of the conclusions at Science North's Science Café event at the Laughing Buddha restaurant Feb. 10.

Three biology and anthropology researchers participated in a panel discussion on how evolution affects our health.

Nicole Mideo, an assistant professor at the University of Toronto's department of ecology and evolutionary biology, said we will need to develop new and creative ways to fight infections as bacteria and parasites evolve to resist current drugs.

“I think we're getting to a point where we're not going to have new drugs to kill germs, and we're going to have to figure out more clever ways to use the drugs that we have,” said Mideo, who has focused primarily on malaria in her research.

New medications are becoming increasingly expensive and difficult to develop.

Mideo said combination therapies are becoming the norm to combat malaria and other illnesses caused by parasites or bacterial infections.

Combination therapies use multiple drugs to ensure malaria parasites don't build resistance to the newest and most effective medications.

Researchers have also explored ways to exploit natural interactions between parasites and bacteria.

Some malaria parasites, for example, are sensitive to drug treatments, while others have evolved to build up resistance to medications.

“Usually what happens is the sensitive ones can out-compete the resistant ones in the absence of drugs,” Mideo said.

Allowing sensitive parasites to out-compete the resistant ones naturally, makes it easier to treat a person with anti-malarial drugs after that natural battlefield has cleared.

It is a common practise in factory farming, for example, to give livestock low doses of antibiotics to speed up and increase growth.

Schulte-Hostedde said the practice is probably a bad idea in the long run, because it creates a perfect environment for bacteria to evolve resistance.

Schulte-Hostedde said there is also a debate in the scientific community as to whether or not it's a good idea for people to finish their prescriptions when they are taking antibiotics.

Drug resistant superbugs were not the only topic of discussion for the evening, however.

Tamara Varney, an associate professor at Lakehead University's department of anthropology, discussed human diet and how it has evolved over the centuries.

The recent Paleo Diet, where people attempt to eat like our paleolithic era ancestors, is unrealistic, she said.

There was no single paleolithic diet, Varney said, because even more than 10,000 years ago, as with today, diets varied by region.

Researchers can still not say with complete certainty exactly what people ate back then.

Many of the food sources from the paleolithic era, such as woolly mammoths, are extinct.

Despite its attempt to romanticize the past, Varney said the main idea behind the Paleo Diet, which focuses on protein and cuts out most carbohydrates, isn't necessarily bad.

“The simple idea of it isn't bad, in terms that we should be eating less simple carbohydrates,” she said.

Many health problems today, Varney said, are due to social and environmental factors.

High diabetes rates in First Nations communities, for example, are linked more to social factors than any genetic predisposition to the disease.

A big change from a traditional diet, and a sudden influx of empty carbohydrates, along with a lack of exercise, is a perfect recipe to develop diabetes and a host of other diseases.