Exploration not benign, NGO says of Ring of Fire

One image showed more than 25 drill pads – cleared circular areas that host two or three drill holes each – along a one-kilometre stretch of land.
Jun 30, 2015 4:04 PM By: Jonathan Migneault 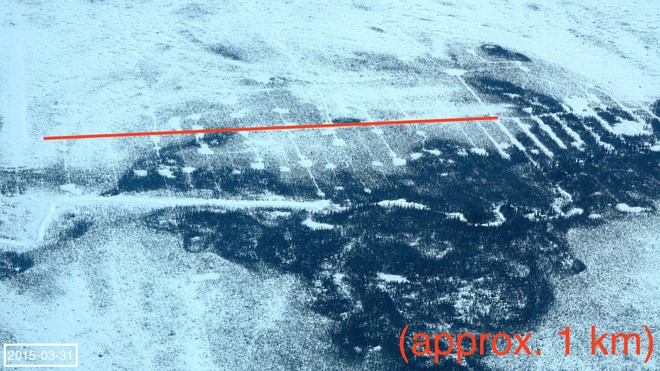 One image showed more than 25 drill pads – cleared circular areas that host two or three drill holes each – along a one-kilometre stretch of land.

In the photo, the drill pads were connected by an horizontal trail cut through the woods, and a series of vertical lines.

“Exploration is a necessary part of the mining cycle, but it's not benign,” said Anna Baggio, Wildlands League's director of conservation planning.

Baggio said there is no environmental review process for mining exploration, and has advocated for a regional environmental assessment in the Ring of Fire, that would provide a blueprint for future exploration activities.

But Garry Clark, executive director of the Ontario Prospectors Association, said prospectors work under rules set out by the Ministry of the Environment when they apply for exploration plans.

Clark added photos of exploration camps taken during the winter can be deceptive.

“I don't think it's as bad as some winter photographs would display,” he said.

Clark said the vertical lines that connect the drilling pads in one of the photos, would be a maximum of 1.5 metres, or roughly five feet in width, and are usually closer to three feet, or under one metre wide.

The lines are used for geophysical readings, and are kept as small as possible to keep the work load and cost down to a minimum.

“The person walks the line and takes geophysical readings on a grid,” Clark said.

In a remote environment like the Ring of Fire, the drills would be transported by helicopter – both out of necessity and to reduce the environmental impact.

The areas set aside for exploration also only cover a very small portion of land, Clark said. The photo of the drill pads, for example, represents just over one square kilometre, but the Ring of Fire covers an area approximately 5,120 square kilometres in size.

Baggio said she visited junior miner Noront's Esker camp, in the Ring of Fire, in 2010.

Noront now holds around 360 mining claims, or roughly 80,000 hectares of land in the Ring of Fire.

More than 20 other companies also hold claims in the region, and together have invested more than $278 million on exploration in the area, according to the Ministry of Northern Development and Mines.

“Our government supports smart, sustainable and collaborative development in the Ring of Fire that strikes the right balance between environmental protection and resource development,” said Northern Development and Mines Minister Michael Gravelle, in a written statement to NorthernLife.ca. “On April 1,

2013, as part of our government’s work to modernize Ontario’s Mining Act, new regulations became mandatory which aim to encourage prospecting, staking, exploration, and development of mineral resources in a way that minimizes the impact on the environment while continuing to recognize and affirm existing Aboriginal and treaty rights.”