Fabio Belli soccer dome under construction – for real this time

After seven years of delays and false starts, dome will honour the late councillor and benefit youth in the city
0
Aug 16, 2019 12:04 PM By: Darren MacDonald 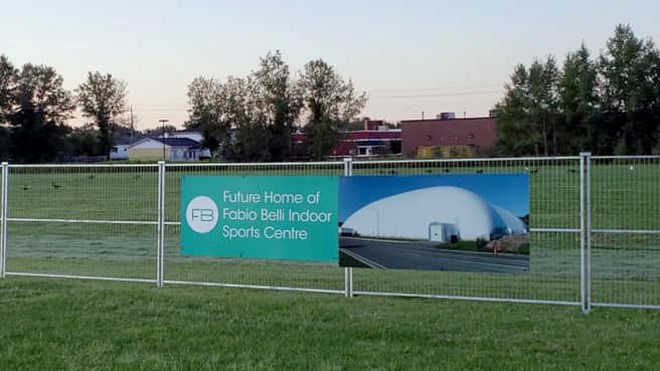 The sign is up at the future site of the city's first sports dome, at Lasalle Secondary School. (Fabio Belli Foundation)

The first time I wrote a story about plans to build a sports dome in Greater Sudbury was in the fall of 2012, when construction was delayed the first time over building code concerns.

“Things are moving forward,” late city councillor Fabio Belli told me that October. “They are expecting to be up and running next year for sure … There just wasn’t enough time this year to get everything done.”

Belli kept fighting for the dome right up until he passed way in April 2014, and there have been several false starts since then.

But this week, construction officially began at Lasalle Secondary on a $4.1-million, 56,000-square-foot dome sports facility. It's a huge relief to members of the Fabio Belli Foundation, who have endured disappointments, but never stopped working to make Belli's dream a reality.

“There have been some setbacks,” said Michel Lariviere, a member of the foundation’s board. “But now construction is underway and we're hopeful that by December, we're going to be able to enter the building. It's ambitious, but that's what we're going to aim for now.”

To get costs down, the foundation changed the size the dome from 100,000 square feet down to 56,000 square feet, meaning they won't have the running track that was planned and a little bit less bleacher space.

Plans for a new field house are on hold, and they will make do with the old one for now, although longer term the foundation aims to raise money to replace it. The Rainbow District School Board is providing $2 million, including funds for the artificial turf, and will own the facility.

Schools will be able to use it during the day, with the foundation running it evenings and weekends.

“It's been a long road for us,” he said. “I think the memory of Fabio, the way a lot of people felt about him, has been enough for us to persist in our work.

“It's more of a passion project for a lot of us. It's more of a matter of the heart than anything else, and that's why we're not afraid to keep working on this after several setbacks.”

Belli's memory, and the fact the facility will benefit so many people, have made it all worthwhile, Lariviere said.

“There's certainly been some ups and downs and, yes, there's been some false starts. But what encourages us is knowing who's going to use it and knowing that our accountability lies to the users and the children and the elderly who are going to use it — as opposed to investors who will be looking for a return on investment.”

There's still lots work ahead, he said, and he's hoping the community will keep supporting them.

“We as an organization still have to do some significant fundraising and we still want to partner with like-minded people the community who want to see this happen,” Lariviere said.

While they haven't made any plans yet, he said a celebration will be held to mark the official opening of the dome.

“We've been so excited about getting heavy equipment out there, we haven't really thought of that yet,” Lariviere said. “But you can you can count on us celebrating this event when it becomes official.

“And I think this is probably a good time to thank all our partners and the community and the people who supported us for so many years — the people who remember Fabio fondly. So thank you to all of them.”

A second, $3.1-million sports dome is also planned on the Kathleen Street side of Sacre Coeur school, but no updates have been provided on that project since last November.

PMS-Nystatin Oral Suspension
Jan 18, 2020 9:00 AM
Comments
We welcome your feedback and encourage you to share your thoughts on this story. We ask that you be respectful of others and their points of view, refrain from personal attacks and stay on topic. To learn about our commenting policies and how we moderate, please read our Community Guidelines.