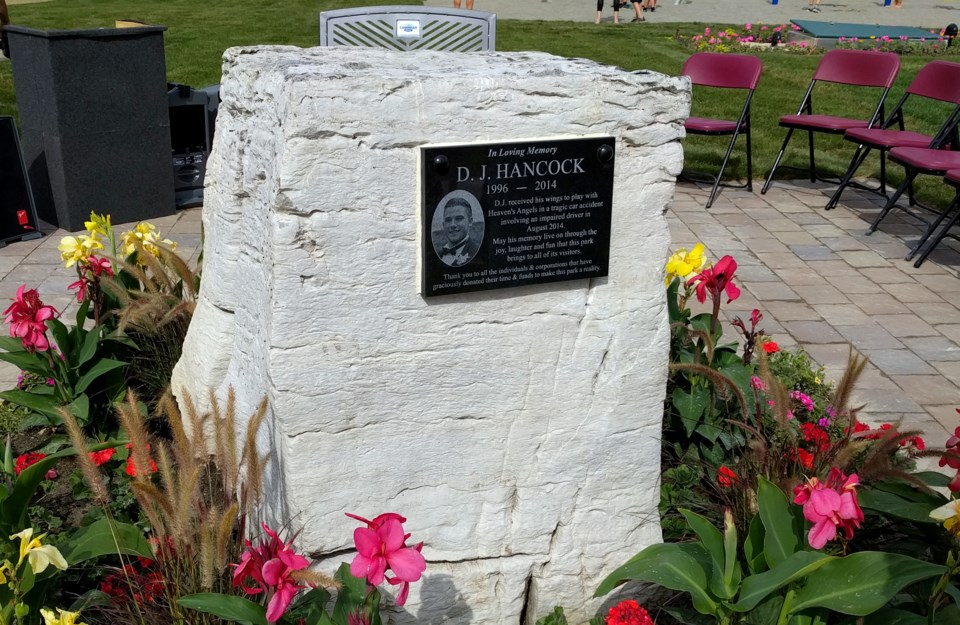 Since DJ Hancock's death in August 2014, his family has worked to keep his memory alive, including through the  DJ Hancock Memorial Park, which opened in 2016. (File)

The family of a Sudbury teen killed in a drunk driving crash Aug. 21, 2014, is suing the driver for $1.6 million, documents filed at the Sudbury courthouse show.

D.J. Hancock was 18 when he was driving home around 11:22 p.m. on Highway 17 from hockey tryouts in Lively. A vehicle driven by Walter R. Carter veered into Hancock's lane, striking Hancock's SUV and killing him. His parents, who were also at the tryouts and were driving behind him, came upon the crash shortly afterward.

Carter, 41 at the time, was convicted in late 2014, and received full parole in August 2017, less than three years after Hancock was killed.

“It's insulting and maddening,” Kim Hancock, DJ's mother, said at the time. “He's going on with his life, but we're still living in a nightmare. It pisses me off. At least let me and my family get over losing D.J. before he's out walking on the street. We're still grieving. It's still like it happened yesterday.”

In the lawsuit, which was back in court April 24, Carter is accused of being negligent in more than two dozen ways the night Hancock was killed.

In addition to being drunk (he was more than three times over the legal limit), Carter is accused of travelling at excessive speeds while failing to keep a proper lookout. He ought to have known he was not competent to drive, the lawsuit says, and failed to take care to avoid the collision.

Further, the brakes and steering of the vehicle he was driving were in bad shape, and he either failed to apply the brakes or was driving a vehicle without working brakes. By doing so, he put Hancock in a position of danger without hope of escape, the lawsuit says.

Even worse, the suit says Carter “allowed himself to become distracted from the operation of the … vehicle by using a cellular device while driving.”

The suit was filed by Hancock's parents, sister, maternal grandmother and paternal grandparents. It seeks $600,000 in damages under the Family Law Act, which allows lawsuits for negligence causing death. It also seeks $500,000 for the mental distress and nervous shock suffered by his parents, and another $500,000 for punitive or aggravated damages on behalf of the entire family.

In addition, the family seeks “special damages” to be disclosed before trial, as well as all legal costs and “any further relief” the judge deems appropriate.

Since the tragedy, a memorial to D.J. Hancock was put beside the Gerry McCrory Countryside Sports Complex and in 2016, the D.J. Hancock Memorial Park opened on Ramsey View Court. The family has also been active with Mothers Against Drunk Driving in hope of helping other families avoid the tragedy they have endured.

Who died at Burwash? When the 1918 flu epidemic collided with Canada’s ‘enemy aliens’ policy
Jul 6, 2020 6:00 PM
Comments
We welcome your feedback and encourage you to share your thoughts. We ask that you be respectful of others and their points of view, refrain from personal attacks and stay on topic. To learn about our commenting policies and how we moderate, please read our Community Guidelines.