Feeding the hungry: LU students give back

At this time of year, most Laurentian University students can't think about much more than their impending final exams.
0
Dec 6, 2014 4:36 PM By: Heidi Ulrichsen 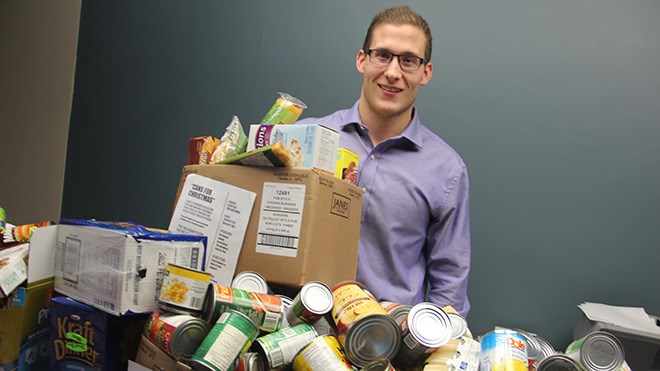 While third-year law and politics student Connor Larocque is getting ready for his exams too — not to mention still keeping up with his part-time job at TD bank — he's also taken the time to think about other people.

Since late last month, he and fellow Laurentian student Adam Johannsson have run their own food drive, “Cans for Christmas,” and collected about $400 worth of non-perishable food items for the Sudbury Food Bank.

They've also gathered assorted clothing and toys to be donated to other charities. The donations came from fellow Laurentian students and staff members, co-workers, friends and family members.

“People in general will say 'I don't have enough time,'” said Larocque, 21.

“I tell them 'Well, you have 24 hours in a day. So let's say 10 hours for working, then you have another eight hours sleeping, and eating an hour, and you still have a little time. It's just the way you budget the time.”

Larocque, whose father, Rod Larocque, is the president of the local charity The Human League, said he's learned from an early age that it's better to give than to receive.

“You get the real joy of life from when you start giving,” he said, adding that if he were in a tight spot financially, and didn't have enough to eat, he hopes someone would help him out.

Sudbury Food Bank fundraising and events co-ordinator Linda Ficola said she had a chance to meet Larocque Dec. 5, after he dropped off the food donations he's received so far.

While she praised the students for their efforts, she said the amazing thing is many people do the same kind of thing. “Our Christmas is absolutely made by all the people who are in the community and giving back,” Ficola said.

Larocque said he and Johannsson plan to keep collecting non-perishable food and other items right up until Christmas. They're even willing to pick up items from people's homes.

The items most in need by the Sudbury Food Bank right now are staples such as peanut butter, pasta and canned goods, as well as personal hygiene items such as toothpaste and shampoo, Ficola said.

For more information about the Sudbury Food Bank, visit www.sudburyfoodbank.ca.