Prostitution in the downtown can be reduced. But only if people come together in a community based approach to tackle this complex issue, say police.
Jul 21, 2010 11:38 PM By: Bill Bradley 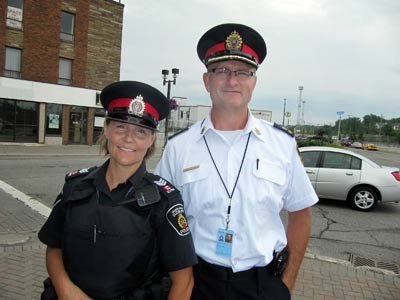 Prostitution in the downtown can be reduced. But only if people come together in a community based approach to tackle this complex issue, say police.

“Enforcement by itself won’t work,” Greater Sudbury Police Services Deputy Chief Al Lekun said in a recent interview with Northern Life. However, he noted police had stepped up foot, bike and car patrols in the area.

Lekun added enforcement must be matched with attempts to solve the root social causes of the problem and deal with all the issues that revolve around it. This includes illicit drug use and the demand for prostitutes by individuals cruising the streets.

Lekun said prostitution in Greater Sudbury is centred in the downtown because of the volume of vehicle and pedestrian traffic there.

“It is an issue that affects downtown cores throughout this country and North America,” Lekun said.

A committee of community representatives, including Ward 10 counsellor Frances Caldarelli, has been working to deal with the problem. They have initiated measures such as the John and Jane education programs, over the past 10 years, Lekun said. Johns, the men, are educated to realize the health, family and criminal risks of soliciting prostitutes. Janes, the women, have been given counselling on how they can receive social support to leave the trade.

But he admitted the committee could be expanded to include more stakeholders.

We need everybody at the table if we are to deal with this issue and prevent it.

“We need everybody at the table if we are to deal with this issue and prevent it,” Sgt. Corinne Fewster, GSPS community response unit, said.

Fewster, a police force veteran of 18 years, said the problem has been in the downtown for decades.

“We knew who the (prostitutes) were. We approached them. We most likely found them with drugs. We arrested them for those types of offences,” she said.

“Then we realized it was a supply and demand issue. We said we would identify the demand. Take the demand away from the girls and start charging (the customers) for taking up these services and for being part of this event.”

“Most of the Johns — the clients of the girls — can be diverted,” she said. Few have criminal records and most are well established in the community, she said.

“Less than one per cent (of Johns) re-offend.”

Vehicles used for soliciting prostitutes can be seized, towed and impounded at the owner’s expense.

“The individuals would have to appear before a justice of the court to retrieve the vehicle. Many find that an embarrassment,” she said.

Diverting women from prostitution is more difficult. Usually they lack job skills and are in a difficult period in their lives.
“Sometimes they do not recognize they need to change their behaviour,” Lekun said.

However, in the last police sweep in May, when 11 women were arrested, six agreed to attend jane school, Fewster said.
Then a third aspect was tried.

“Now we are identifying the curb crawlers, the traffic that is adding to the atmosphere,” she said. “The girls will not go away if the traffic keeps going around the streets. Some men just watch the show for the excitement. We have asked them to stop doing that as well.”

She said they can be faced with criminal offenses because they are taking away from residents their enjoyment of their property. Businesses can be negatively affected by the constant traffic congestion.

“We don’t need these drivers downtown.”

No curb crawlers have been charged yet, Fewster said.

“We have to create a pattern first,” she said. “That is where we identify the curb crawlers. We will send community safety letters home. We have about 20 ready to be sent within the next month. If they are seen there again after we have established a pattern, they can face criminal charges at that point.”

In the meantime, police are on patrol daily in the downtown as a deterrent.

Const. Dean Browning, a 19-year veteran of the force, bicycled past Northern Life after the interviews with the Lekun and Fewster.

“I patrol all summer all over Greater Sudbury,” Browning said. “I find being on the bike really helps. People do not see me coming,” he said as he chuckled and sped off on his bike.