Specific cause of the fire at Skead plant is unknown, although not considered suspicious
Jun 5, 2021 9:06 AM By: Heidi Ulrichsen 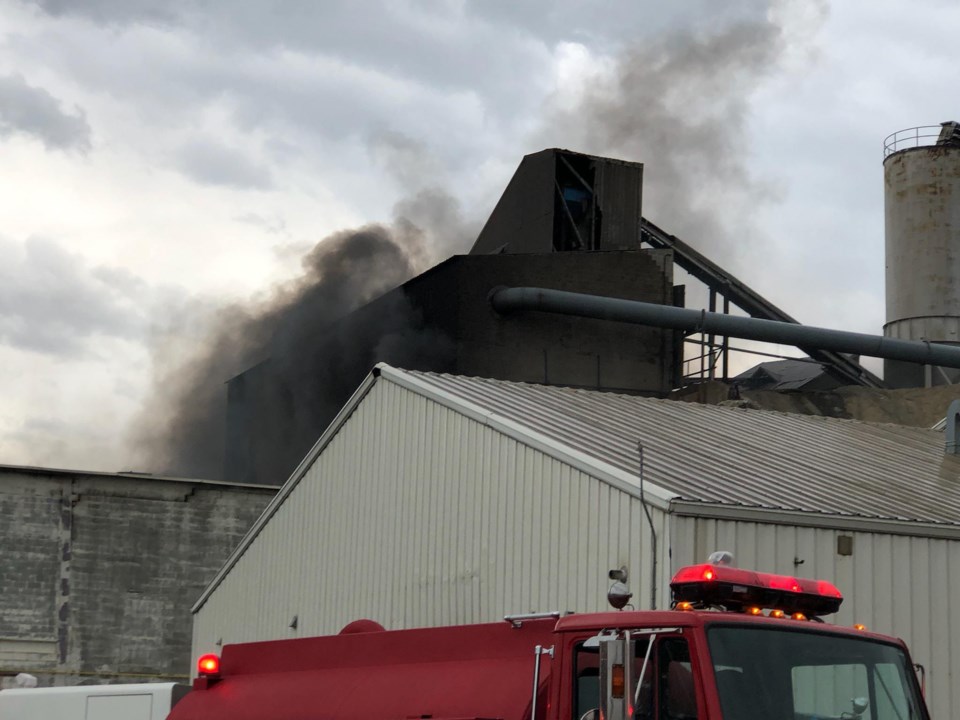 Greater Sudbury Fire Services are fighting a fire at the Fisher Wavy plant on Skead Road this morning.Supplied/Jesse Oshell

Firefighters were dispatched to the Fisher Wavy concrete plant in Skead early Saturday morning after equipment inside the plant caught fire.

As of late Saturday morning, the fire was considered “under control,” as firefighters continued to put out difficult-to-reach areas.

The fire department got the call at around 6 a.m. Saturday after passing motorists reported a large column of black smoke coming from the complex off of Skead Road.

Equipment inside of the cement block/steel industrial structure had caught fire, and spread to other areas of the building, including office and storage space.

“The fire appeared to have been smouldering and/or growing for a period of time,” said Deputy Fire Chief Jesse Oshell.

He said fires of this nature are always challenging to extinguish, as they involve potential hazards for firefighters and difficult-to-access areas. Fisher Wavy officials were on hand at the site to give information on the building’s layout and any hazards.

So far, there have been no injuries reported, Oshell said. Nobody was at the plant when the fire started, as the company had ceased operations for the day as of late afternoon Friday.

He said the cause of the fire is currently unknown, although it is not considered suspicious in nature.

Although it’s difficult to give a damage estimate for an industrial fire, Oshell said the company is probably looking at $500,000 or more. “But I don’t have a good dollar value for their specific equipment,” he said.

Greater Sudbury Fire Services are fighting a fire at the Fisher Wavy plant on Skead Road this morning.

Deputy fire chief Jesse Oshell first sent out a tweet about the incident at 6:41 a.m. Saturday.

He said the fire department was on scene with "multiple units," and tanker operations were occurring. "Please be cautious in the area," he said.