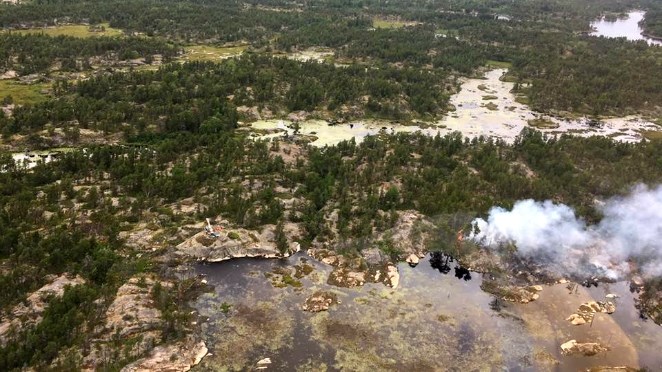 Residents in Alban living west of the high powered hydro lines on Highway 64 have been told to get themselves ready to evacuate as a massive forest fire continues to threaten the area. (Supplied)

Residents in Alban living west of the high powered hydro lines on Highway 64 have been told to get themselves ready to evacuate as a massive forest fire continues to threaten the area.

As of 6:40 p.m. Monday, Parry Sound 33 forest fire has affected 8,974 hectares. Despite a large effort to contain the blaze, Alban residents in the affected area are being urged to prepare to leave should the order come.

“Once an evacuation order is issued, you will have 24 hours' notice,” says a post from the Municipality of French River.

Anyone who believes they need to leave the area before an order is issued is being asked to call 705-898-2294 and leave a message if no one answers. Or they can email webmaster@frenchriver.ca.

“This ensures we know you have left the affected area safely,” the post said.

If the evacuation order does come, residents will be notified through the town's website (http://frenchriver.ca), through TV alerts, and door-to-door.

The post also said an implementation order is being prepared by the Ministry of Natural Resources and Forestry. The order would ban travel in areas near the fire where either there is a danger to the public or where fire crews need unobstructed access to battle the blaze.

“The order restricts all travel (air and waterways) access and use in identified areas and may be modified regularly to reflect changing conditions,” the post said.

According to the MNRF, winds from the west/southwest could bring smoke from Parry Sound 33 into surrounding communities  and along Highway 69. The fire is about six kilometres west of Highway 69 and less than one kilometre south of the Pikerel River near the CN trestle bridge on the west side of Highway 69.

The post also included a reminder that the ban includes flying drones, which could net a fine as high as $3,000.