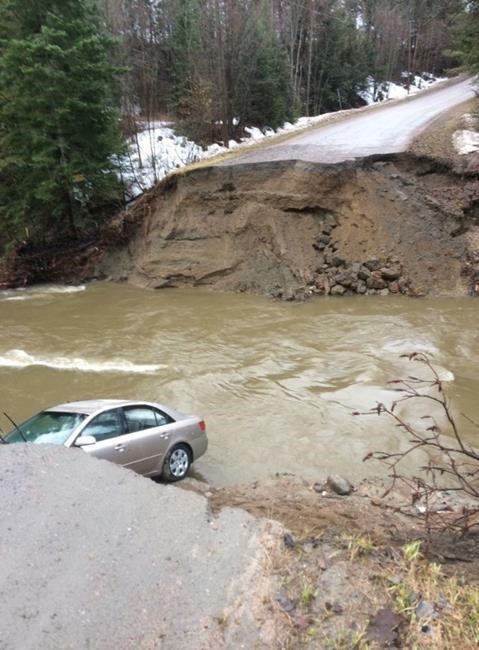 MONTREAL — A woman in her 70s has died after driving her car into a massive sinkhole caused by flooding in western Quebec, police say.

The accident left her sedan upside down in a swollen stream after rising river levels swept away part of the road in the Outaouais region overnight.

Sgt. Martin Fournel of the MRC des Collines police said witnesses parked near the washout tried unsuccessfully to warn the driver as she approached.

"That lady, who was driving by herself on that road, fell into a sinkhole basically because of the flooding. There was a culvert that was not there anymore, so the road was cut in half and she was not able to brake and avoid the accident," Fournel told The Canadian Press.

The woman was taken to hospital but pronounced dead soon after, he said.

The accident occurred at about 3:30 a.m. Saturday in the Municipality of Pontiac, about 30 kilometres northwest of Ottawa.

Pontiac, which sits along the Ottawa River, is one of at least three municipalities in the Outaouais region to declare states of emergency, along with Saint-Andre-Avellin and Val-des-Monts. Trois-Rivieres is also in a state of emergency.

On Friday, both the Quebec and New Brunswick governments called for federal assistance — including Canadian Forces soldiers on the ground — as the provinces brace for heavy spring flooding this weekend.

Quebec Public Security Minister Genevieve Guilbault told a news conference in Quebec City that the risk level hasn't changed in recent days, but authorities now expect the brunt of flooding will begin on Sunday and last longer than expected.

While the situation could change depending on the weather, Guilbault said she elected to ask for assistance as citizens scrambled to protect their homes while heavy rain warnings were in effect for much of southern Quebec.

About 40 millimetres of rain fell on the Montreal area since Thursday, with five to 10 millimetres more expected Saturday, according to Environment Canada. Rainfall warnings have been lifted, but water levels were already high and were expected to rise sharply with warm temperatures and snowmelt runoff.

"My only priority is the safety of citizens," Guilbault said, shortly after the request for help was accepted by Public Safety Minister Ralph Goodale.

"I will spare no effort over the next few days to ensure the safety of citizens."

Officials in several communities are worried the flooding could be even worse than the record flooding of 2017 that forced thousands from their homes.

Guilbault said Canadian Forces brass were discussing with provincial officials where to deploy military resources. She added she'd spoken directly with Brig.-Gen. Jennie Carignan and added the duration of their stay will depend largely on the situation on the ground.

Across Quebec, municipalities have been preparing sandbags and reinforcing homes as flood waters continue to rise.

"Today is an important day, we're predicting we'll reach the water levels reached in 2017 in the next 24 hours and even exceed it," said Ginette Bellemare, the acting mayor of Trois-Rivieres, Que., about halfway between Montreal and Quebec City.

"For our citizens, it's a race against time. They must mobilize and protect their property."

Guilbault said the province will also allow stores — usually closed on Easter Sunday — to remain open this weekend so residents can stock up on supplies.

Thomas Blanchet, a spokesman for the province's public safety department, said residents should be ready for a sharp spike in water levels that could come quickly, and he implored them to follow the instructions of local officials.

Blanchet said while there are no official evacuation orders in the province, some municipalities have issued preventative orders, such as Rigaud and Pointe-Fortune in southwestern Quebec.

Rigaud officials reported they expect a rapid rise in water flows on Saturday.

"The latest data confirms that water levels as high as those observed at the height of the May 2017 flood could be reached, depending on the amount of rain received, by next Monday," the town said in a release.

Plante said the boroughs were well prepared, having learned lessons from record floods two years ago.

"We're putting all our energy, but in the end Mother Nature decides," Plante said.

In Saint-Raymond, about 60 kilometres northwest of the provincial capital, 24 seniors in three residences have been moved to higher ground as the Ste-Anne River levels continue to rise.

Earlier this week, the Chaudiere River burst its banks and flooded a large part of downtown Beauceville, about 90 kilometres south of Quebec City. Officials there called it the worst flooding since 1971, with 230 homes and businesses flooded. At least 28 people remained unable to return home on Friday.

Meantime, Quebec City and the Gaspe Peninsula can expect up to 30 millimetres of rainfall this weekend, said Environment Canada meteorologist Andre Cantin.

“That will help the snow to melt again and we do not expect the river will be able to go down until at least 48 hours," he said Saturday morning.

Scorching day ahead with chances of an afternoon thunderstorm
May 26, 2020 5:00 AM

Air Canada extends North Bay flight suspension until the fall
May 25, 2020 8:00 PM
Comments
We welcome your feedback and encourage you to share your thoughts. We ask that you be respectful of others and their points of view, refrain from personal attacks and stay on topic. To learn about our commenting policies and how we moderate, please read our Community Guidelines.