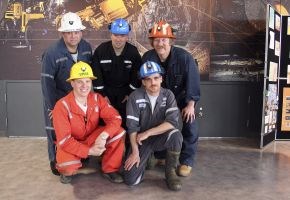 Some of the miners that took part in the Mineopoly Mining games at Dynamic Earth during the Mining Week kick off are: back from left Darren Pattison (Vale Inco), Mark Smith (FNX), Alf Charrier (Xstrata). Front from left Chad Vinkle (Vale Inco) and Victor Kuipers (First Nickle). The rich deposit has and will contribute $1 trillion to Ontario and Canada, said FNX chair and CEO, John Lill. Photo by Marg Seregelyi.

The ore body of Greater Sudbury is estimated to be worth $1 trillion dollars.

That is what the honorary chair of Sudbury Mining Week, John Lill, President of FNX, told the audience at the launch of mining promotion and education week at the Atlas Copco Theatre at Dynamic Earth Friday morning.

“Taking historical production at current commodity prices and then (combining) the value of that production plus reserves, it comes to over $1 trillion,” said Lill.

“This is one of the great ore bodies of the world. The wealth generated here has been a major asset for Ontario and Canada,” he said.

Mining is being celebrated in this community today until Friday, May 16.

Mayor John Rodriguez told the audience: “If you want to know about mining you come here."

Each year the organizers of Sudbury Mining Week are able to make the various events bigger and better, thanks to a multitude of sponsors, said Lois Lavoie, chair of the week long celebration.

On Friday, 125  Chelmsford high school students packed the Atlas Copco Theatre at Dynamic Earth to watch fellow students play a game called, Are You More Resourceful Than A Canadian Miner?, hosted by April Whalen. She recreated the popular television show Are you Smarter Than a Canadian Fifth Grader into a mining week event. In November 2007, Whalen, a Mansour Group employee, won $25,000 on the TV show and later decided  to bring the concept from the TV show to Sudbury.

Two students won $100 each, one $75 and another received some cash, said Whalen. Participating students had to answer questions such as which lake was created by a second meteorite impact. The answer by the way is Lake Wanapitei.

Local high school students will continue to play mining related games next week at Dynamic Earth in French Monday and in English Tuesday, May 13 at 10 am.

- The public is encouraged to visit New Sudbury Shopping Centre on Saturday to tour mining-related exhibits and learn more about the industry.

- A business luncheon with the U.S. Ambassador, David Wilkes, takes place at Bryston's in Copper Cliff on Tuesday, hosted by the Greater Sudbury Development Corporation.

- The largest mining show in Canada, organized by DAC Marketing begins Wednesday, May 14 and continues Thursday, May 15 at the Exhibition Centre, 967 Falconbridge Road. Over 135 companies from around the world will showcase their latest products and services.