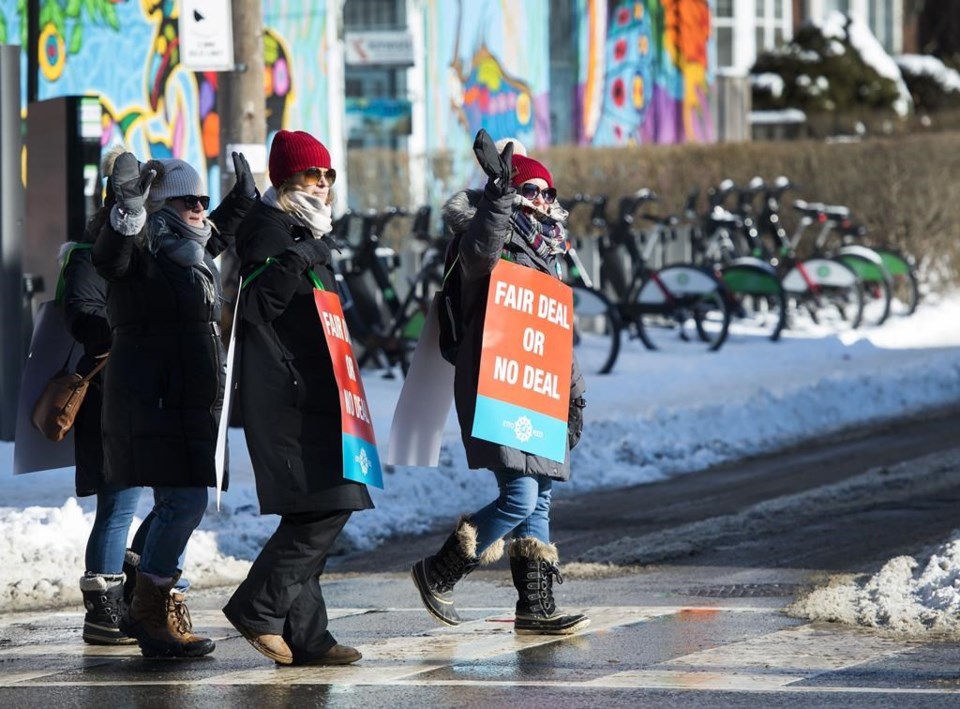 MISSISSAUGA, Ont. — Premier Doug Ford issued a vague warning to teachers' unions Friday, while all four major groups are engaged in job action and contract talks are largely at a standstill.

"We'll get (deals) done, but there's only so long my patience can last with the head of the unions," Ford said. "So stay tuned."

Ford did not elaborate on what he meant, but said later he is not looking at back-to-work legislation "at this point."

Public high school teachers have staged six rotating, one-day strikes, including one that was provincewide. Public elementary teachers will soon start a second week of rotating, one-day strikes. Catholic teachers held a provincewide strike on Tuesday. All four unions, including the one representing French teachers, are on work-to-rule campaigns, resulting in high schools delaying the Grade 9 standardized math test to the spring and many elementary schools not sending home report cards.

The premier took pains to distinguish the union leaders from the nearly 200,000 teachers and education workers they represent.

"A message to the teachers: I support you," Ford said. "We have some great, hardworking men and women that show up every day. I totally disagree with the head of the union."

He then went further, suggesting — without providing evidence — that the teachers themselves don't support their union leadership.

"I'll be very frank: A lot of teachers are fed up with the unions," Ford said. "When I talk to them they said, 'Oh, we're terrified of our unions.' You've got to be kidding me. You're terrified? I hear over and over and over again that the teachers want to put this behind us, they're happy, go in the classroom and teach our kids."

All four union leaders have been re-elected as presidents within the past two years and late last year members of the four unions voted between 95.5 and 98 per cent in favour of strike action.

Elementary teachers were on strike Friday at schools in the Bluewater and Ontario North East school boards, on the Elementary Teachers' Federation of Ontario's fifth day of rotating, one-day strikes. Those walkouts are set to continue next week, and ETFO announced Friday that boards targeted on Wednesday will be: Greater Essex County, Near North, Limestone and Upper Canada.

The union representing teachers in the French system says it will start Phase 2 of a work-to-rule campaign on Tuesday, but has not yet said what that will entail.

This report by The Canadian Press was first published Jan. 24, 2020.